As mentioned before, London is quite a food haven. From fine dining to casual bistros and the neighbourhood restaurants, London has it all!

So let’s see where we ate around in this city… 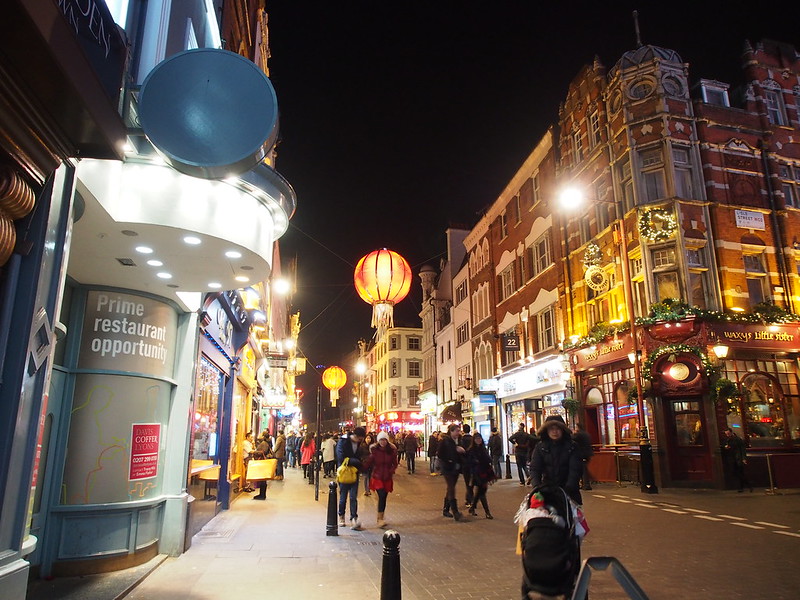 This was where we had our first meal. We felt quite relieved stepping into Chinatown, after all the pastas and pizzas in Italy. Finally, some rice! 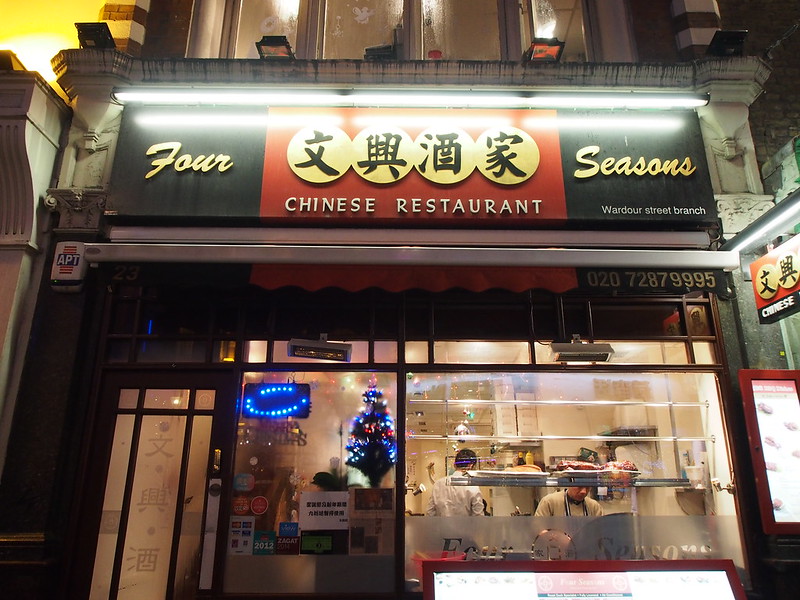 Now, I’ve heard a lot about the duck rice at Four Seasons, about how crisp the skin was and the succulent duck meat. So expectations were running high. 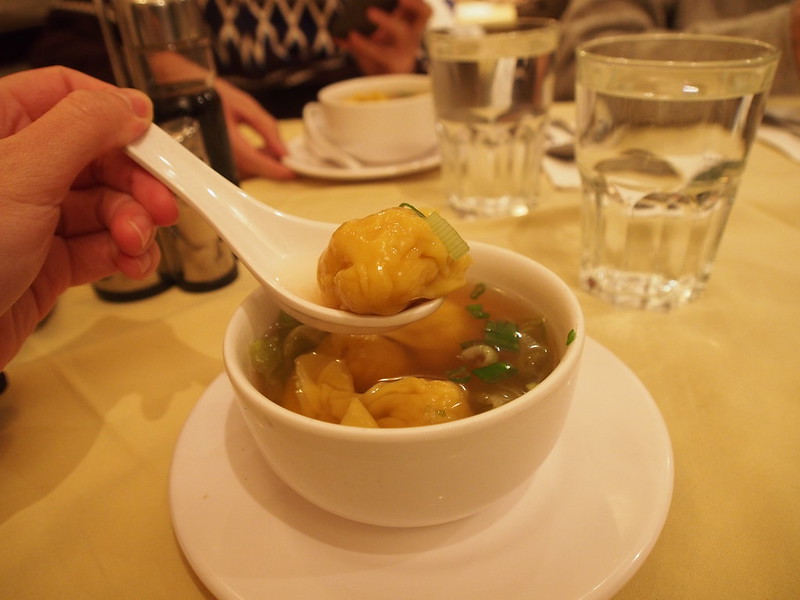 Starting off with some wanton soup

Mum wanted something soupy so we ordered this. It totally hit the spot for her – hot soup to cure the winter blues and juicy wantons with generous-sized prawns inside. 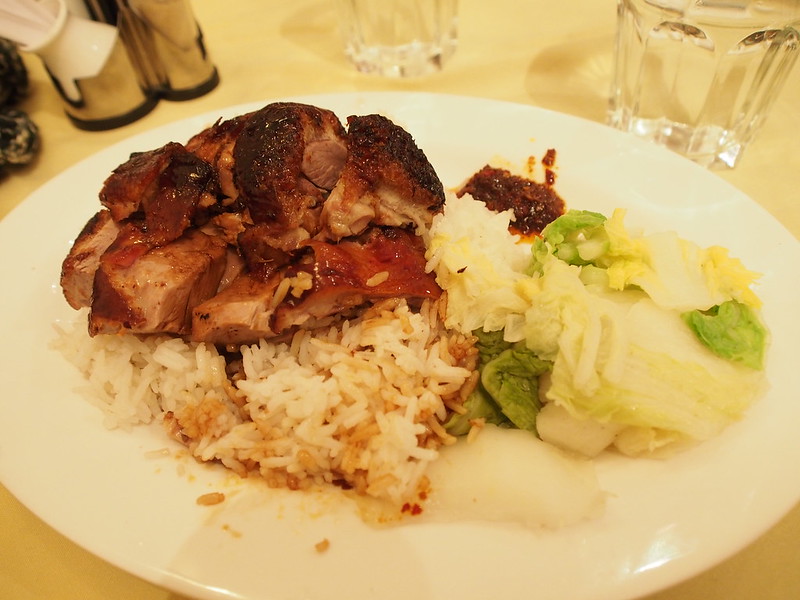 The main deal served shortly after

Hmmm from the first look, it didn’t look anything special. The skin didn’t look crisp at all. 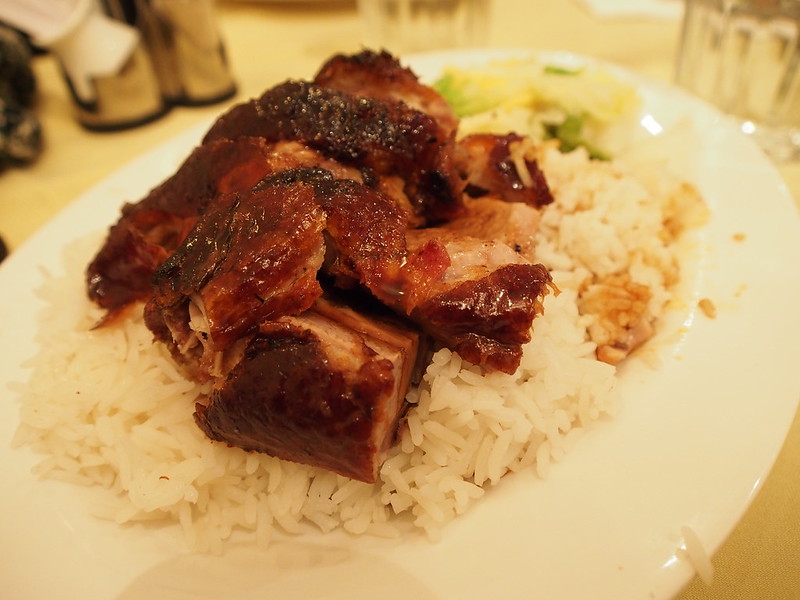 Does it look better from another angle?

And yup as we tucked in, we couldn’t find that ‘X’ factor. Mum found that the dish was served cold which wasn’t to her liking. I found the duck meat seasoning a little on the sweet side and didn’t think the skin was roasted enough.

So to us, it was just an okay plate of duck rice – it didn’t quite meet our expectations after all!

Anyway, we came back to Chinatown on another day for a quick meal. 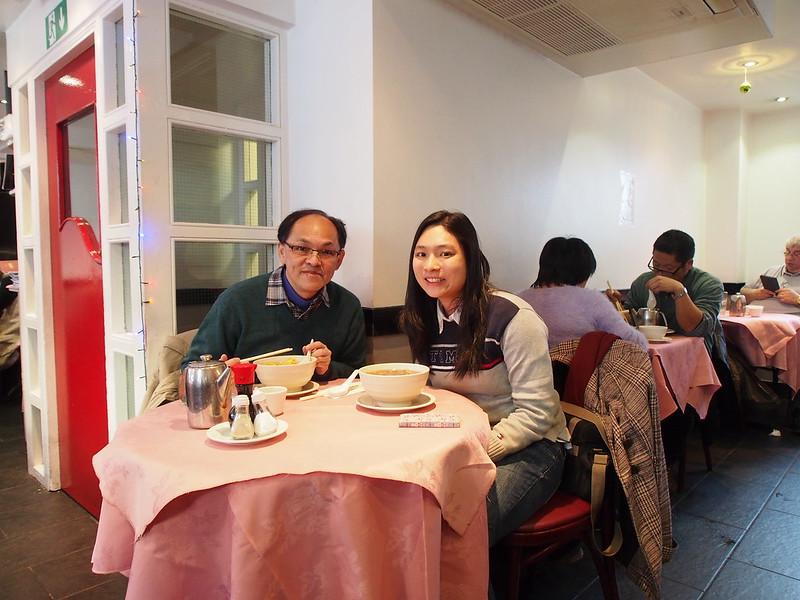 This was the day that all of us caught musicals, except Dad (he preferred spending the time resting in the apartment – it had been a pretty packed trip after all!).

Mum and Bro had rushed off to catch Wicked and as there was still some time before The Lion King (which I was watching), Dad and I had some time together 🙂 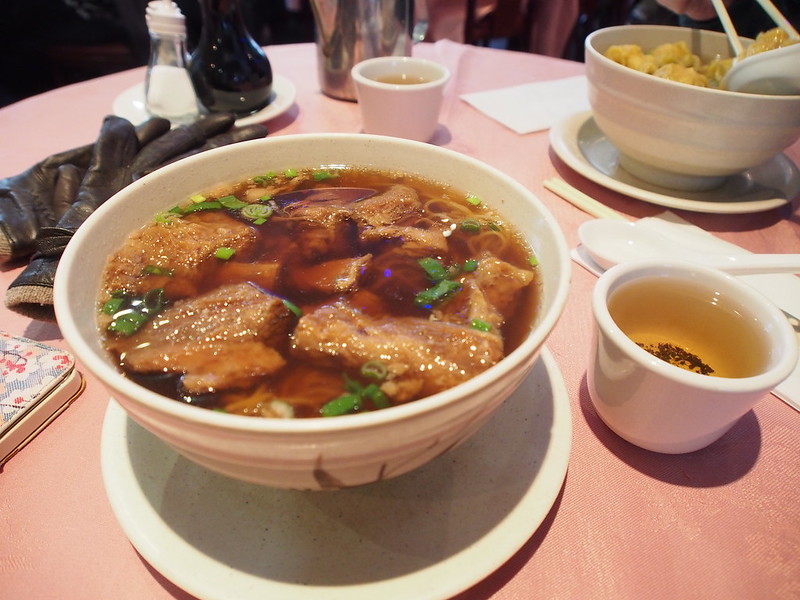 This was just some random restaurant we picked but that piping hot bowl of noodles was such a good fix. The portion was generous and filled our tummies well.

So despite the dampener at Four Seasons, I’ve decided that Chinatown can still be counted on for a good and reasonably-priced (nothing is cheap in London!) meal. 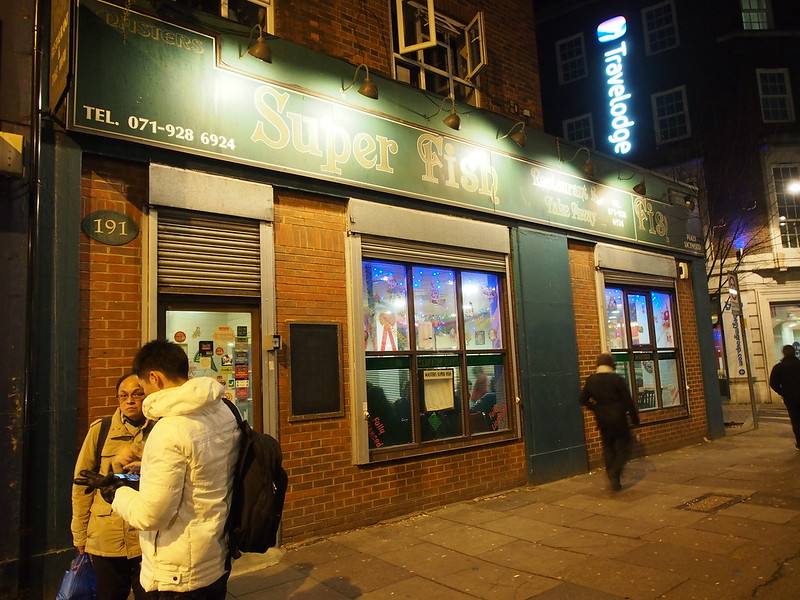 This was recommended to us by our AirBnB host. And we got an idea of how good it was when we saw this… 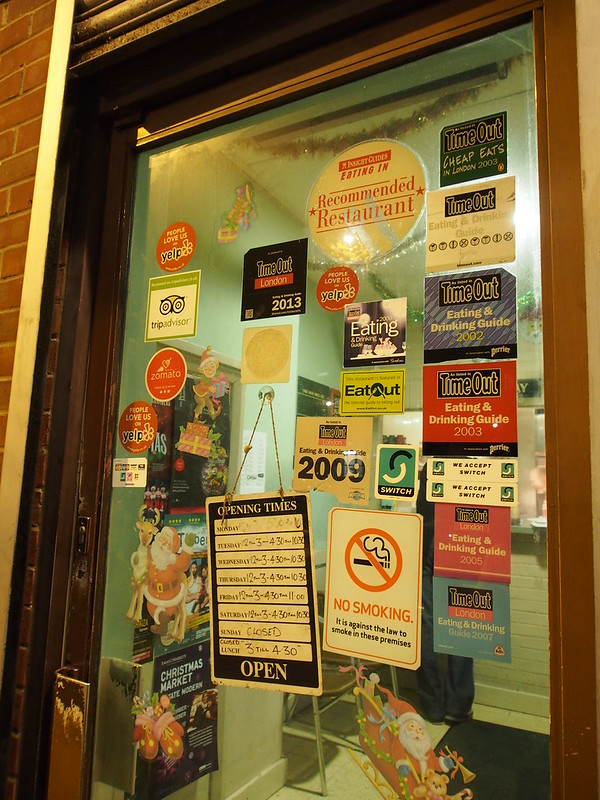 And if we needed any other assurance, there was this group of policemen huddled at the entrance. For awhile, we were wondering if we were entering a crime scene! We must have looked really puzzled, as one of the bobbies opened the door for us and told us that they were just grabbing their dinner for takeaway – haha!

Well, I guess if this is a favourite among the local policemen, there’s gotta be something about this place! 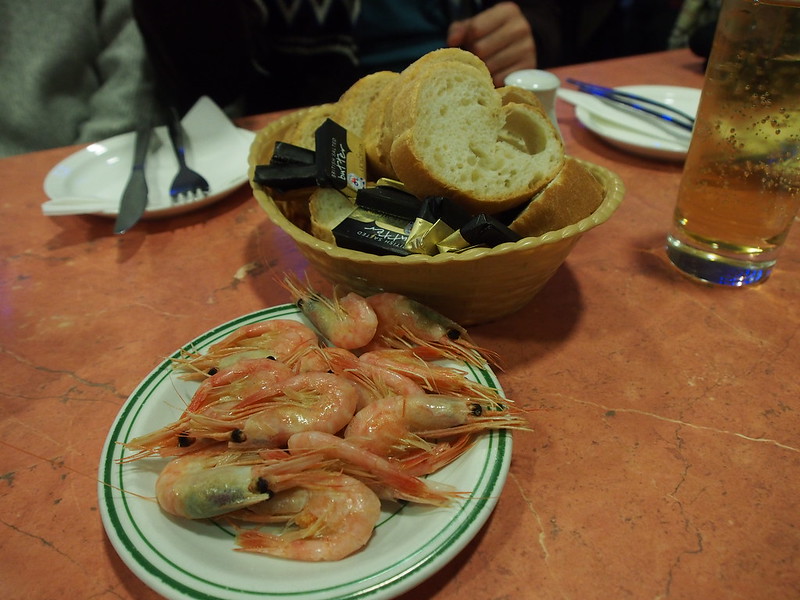 And yup, there was really something about the fish & chippies here. 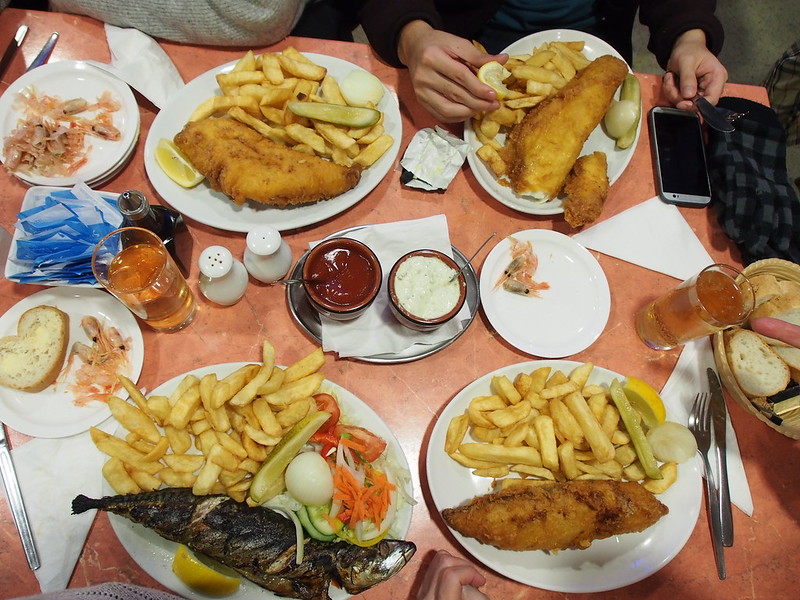 The full works. How big are the portions?!

Don’t let the looks deceive you. Beyond the ordinary looking fish, the meal certainly packs a punch! 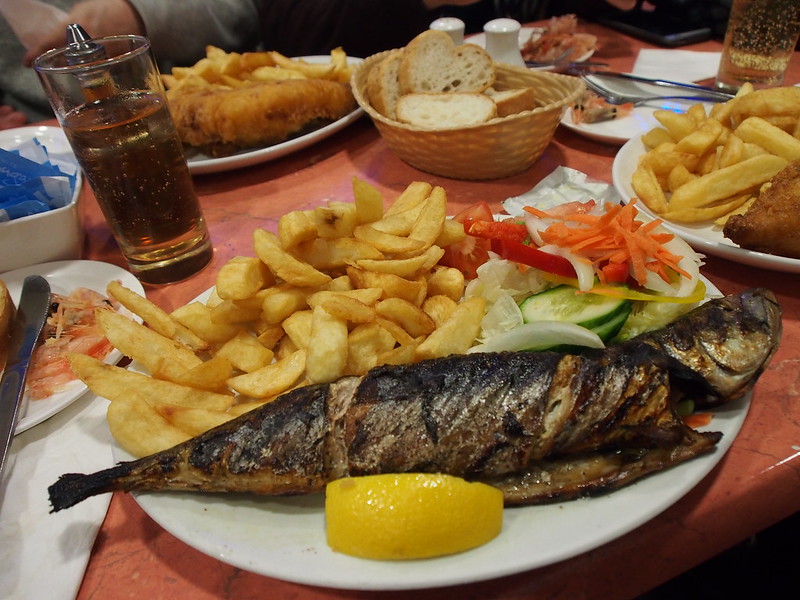 This grilled fish was absolutely meaty and skin was crisped up nicely. With the squeeze of lemon over, it was really appetising. 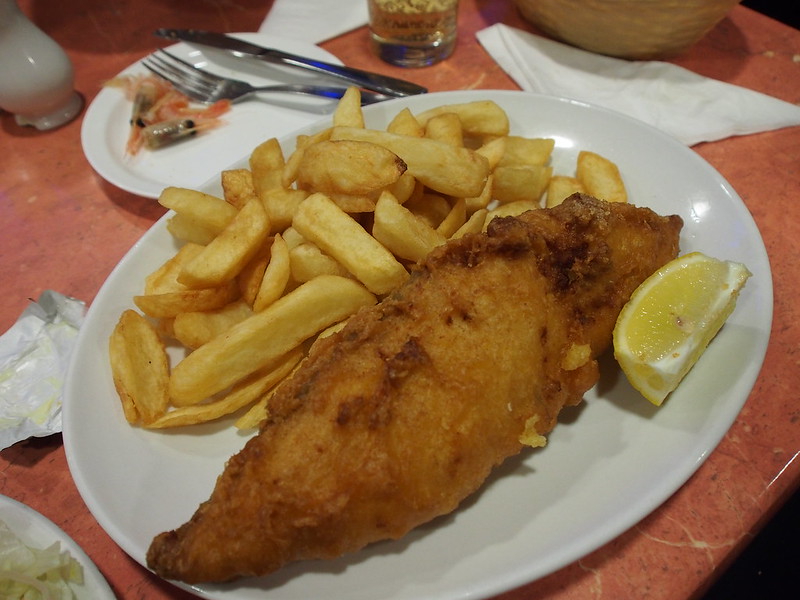 But nothing could quite beat the good ol’ fish & chips. This was hands down the best fish & chips I’ve ever had (sorry Australia!), with its crispy battered coating and succulent fish inside. The fish meat actually tasted fresh despite being deep-fried!

So if you’re looking for a mean plate of fish & chips in London, you know where to go! 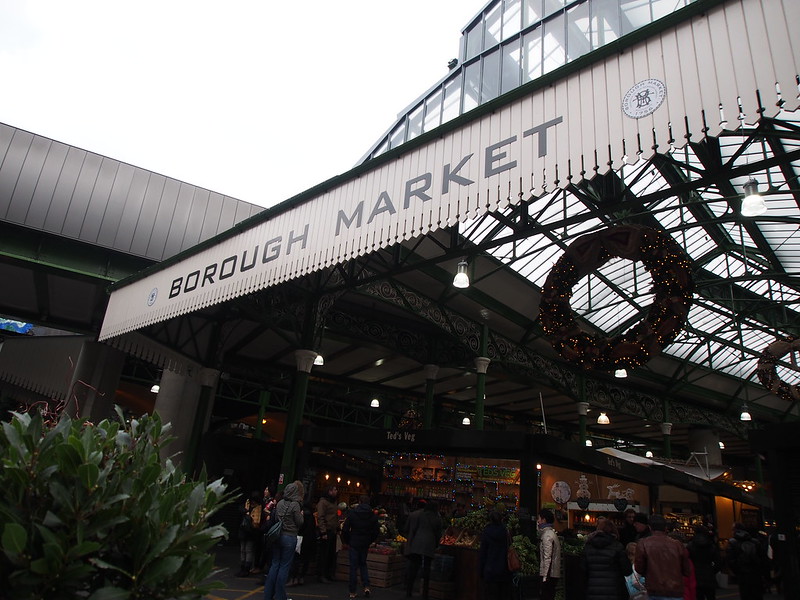 I was actually really excited about visiting Borough Market, because I’m a fan of food markets. It is no secret that I adore the Queen Victoria Market and South Melbourne Market, and I had good memories of La Boqueria Market in Barcelona too! 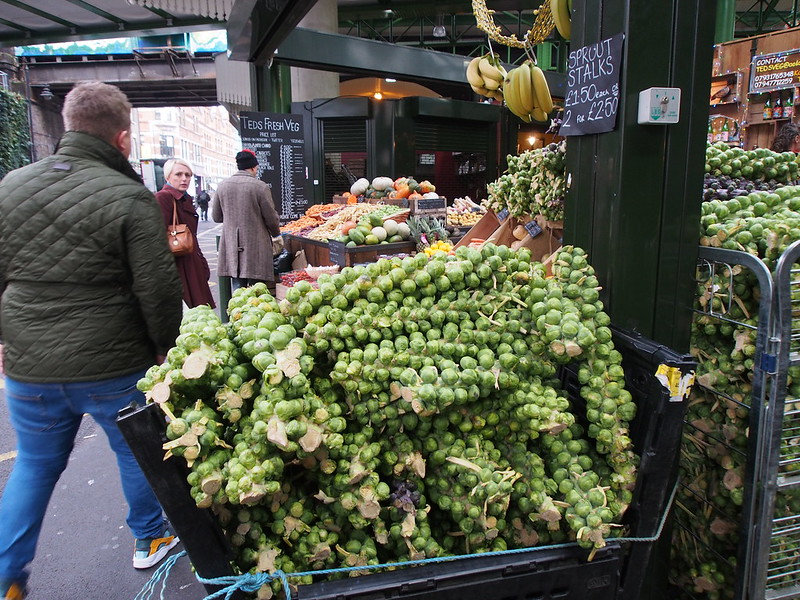 This is where we found out that brussel sprouts grew on stalks! :O

However, to my slight disappointment, the offerings at Borough didn’t seem as wide as the food markets back Down Under. Perhaps it was the Christmas period and many stalls were closed, which made the market less lively. 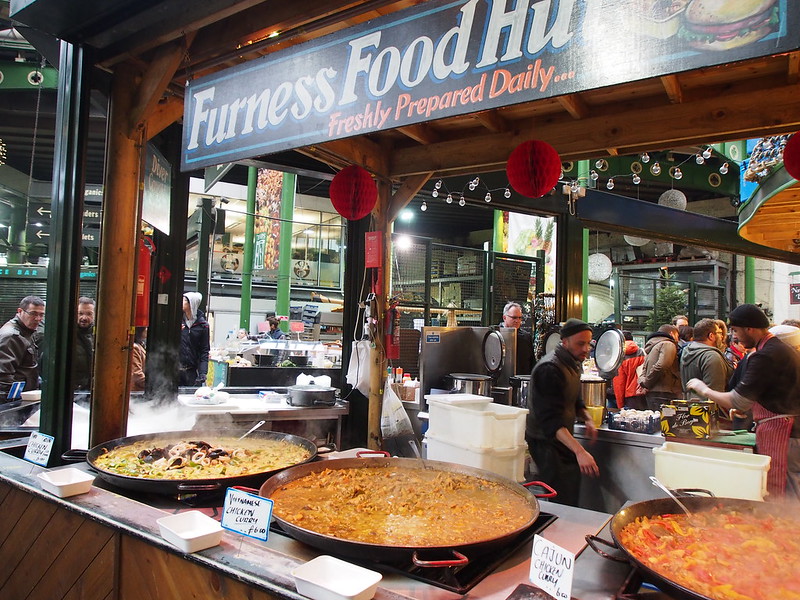 One of the few stalls opened on Boxing Day

However, there was still one stall that caught our eye… 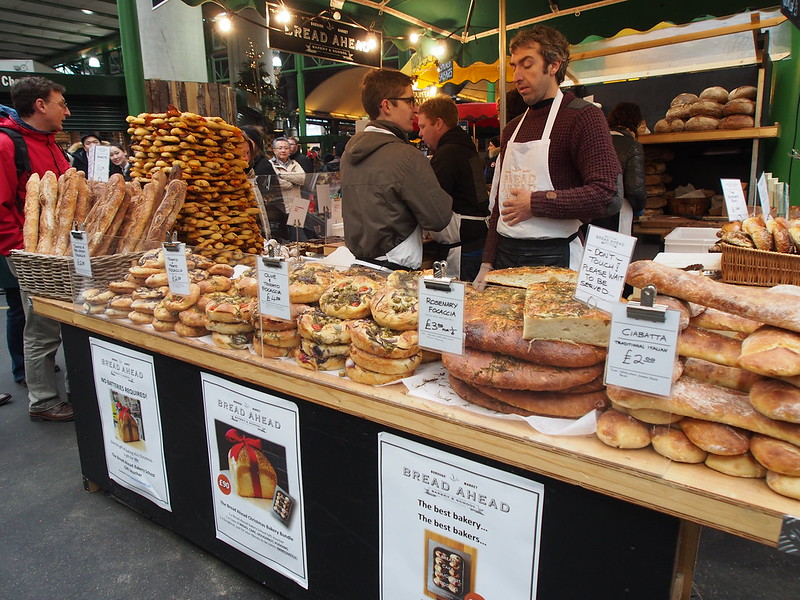 So we all decided to give the breads a go, as well as THIS: 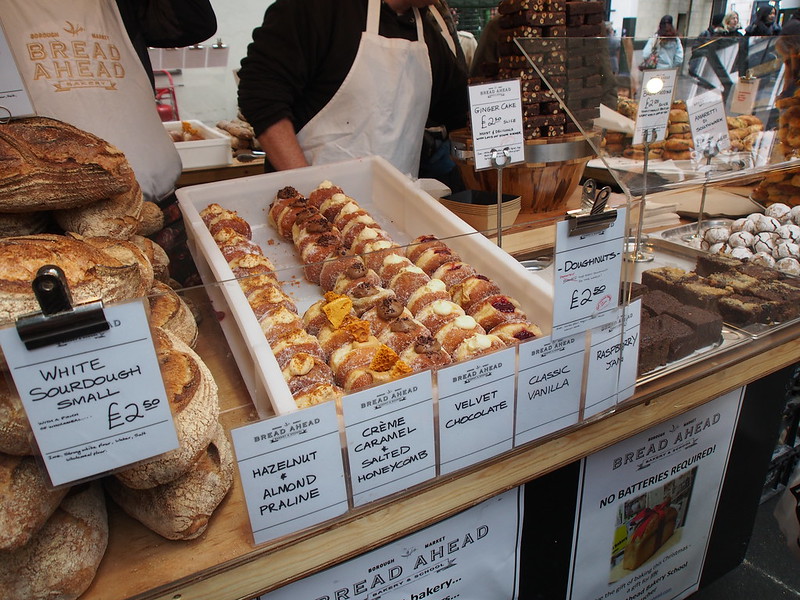 How good do those flavours sound!

While the bread was good, let me tell you, the doughnuts were quite something else. We picked the hazelnut & almond praline one and the cream was divine; you taste exactly what is described. Lipsmackingly delicious!

Well at least we found something pretty special and good at Borough Market – hurray! 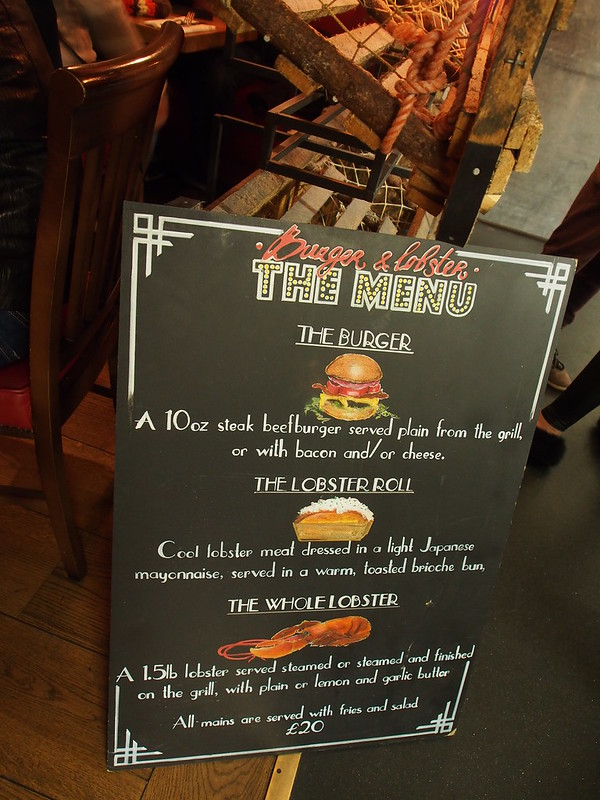 Getting to this place was abit of an adventure.

It was a brother-sister date as my parents were feeling lazy and wanted to grab dinner somewhere near the apartment. So we tube-ed to the Soho outlet which was the nearest to where we were.

But lo and behold, when we got there, they were closing early for the day 😦 The staff member apologetically told us that we could try the next nearest outlet at Knightsbridge.

Now, we didn’t feel like spending on another tube trip so after walking around the whole day in the cold, we did the next sensible thing – we WALKED all the way to Knightsbridge (go us!).

And can you believe it, when we got to the Harvey Nichols departmental store, the main doors were well bolted and locked!! Hungry and tired, we pushed on and looked around. Finally, we found an open door that led us to a lift lobby which got us up to the 5th floor. 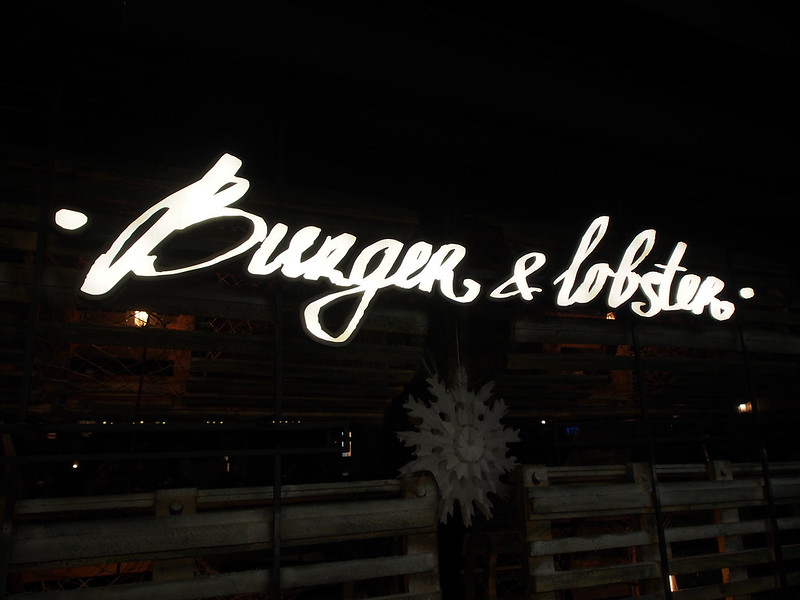 Haha we were kinda glad that our parents were not with us; they would have made us turn around and go back!

But since we were so deep into our quest, we just decided to wait. Hohum. 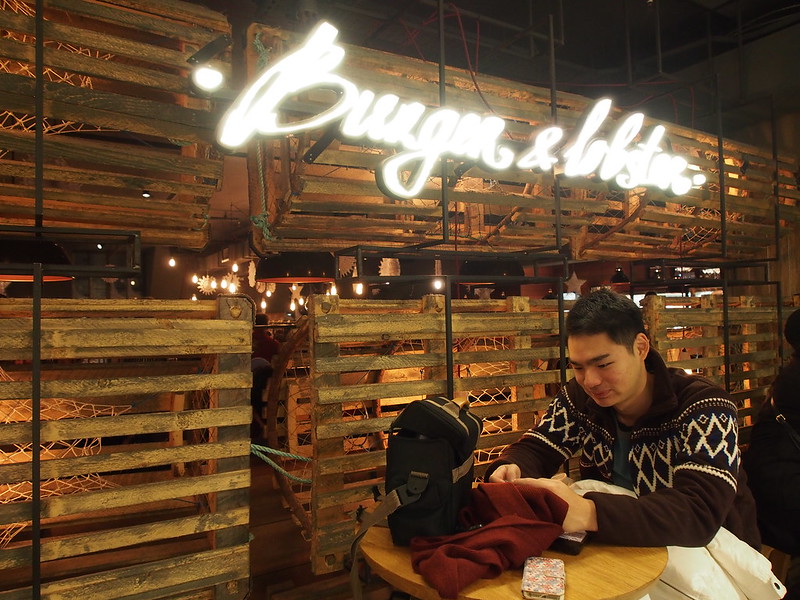 No turning back now 😛

Thankfully, the wait turned out to be about 25minutes only – phew! 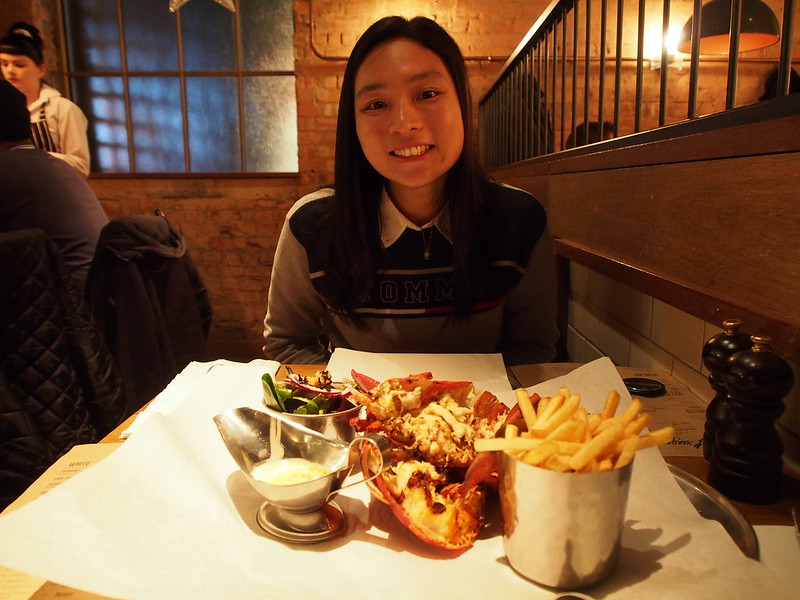 And our food was served up pretty quickly too – yay!

I found the lobster to be a little on the dry side and it didn’t quite match up to that juicy lobster I had at La Paradeta. 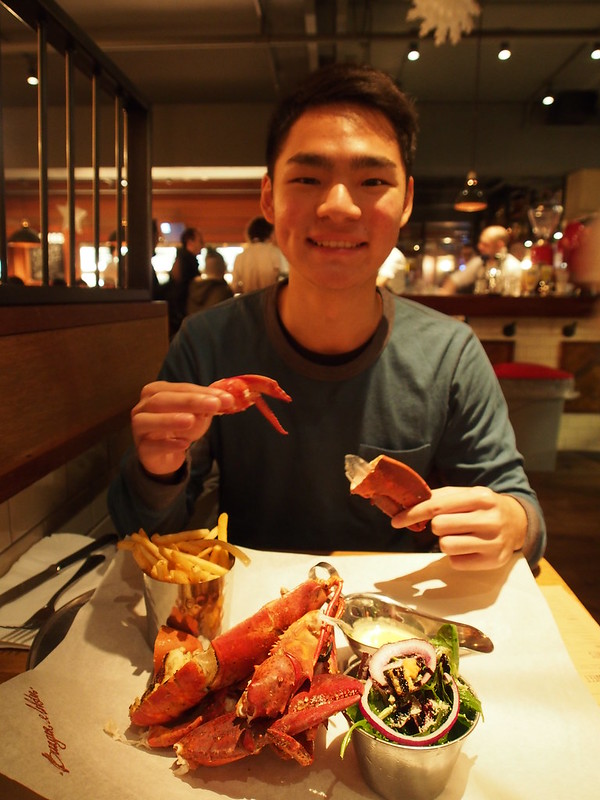 But overall, it was a good meal. We certainly felt rewarded after such an exhausting hunt! The portion size is definitely filling and I think it’s pretty good value for a lobster meal in London!

So that was our foodie journey around London. For the short time that we spent there, we got quite a few good finds so I can imagine how much more this city can offer!