….Do as the Romans do, so the saying goes. We are not quite sure what the Romans would have done in our shoes, but we did our best, given the circumstances thrown at us.

It wasn’t the most delightful of beginnings. We got into Rome, tired from our train ride from Florence. And upon our first step into the metro, we nearly got pickpocketed.

Prior to that, we already heard many pickpocketing stories in Rome and were on alert. That is why Dad could spot them and yelled at them, before they escaped through the closing doors of the metro tube. But allora, we didn’t expect it to happen so soon! 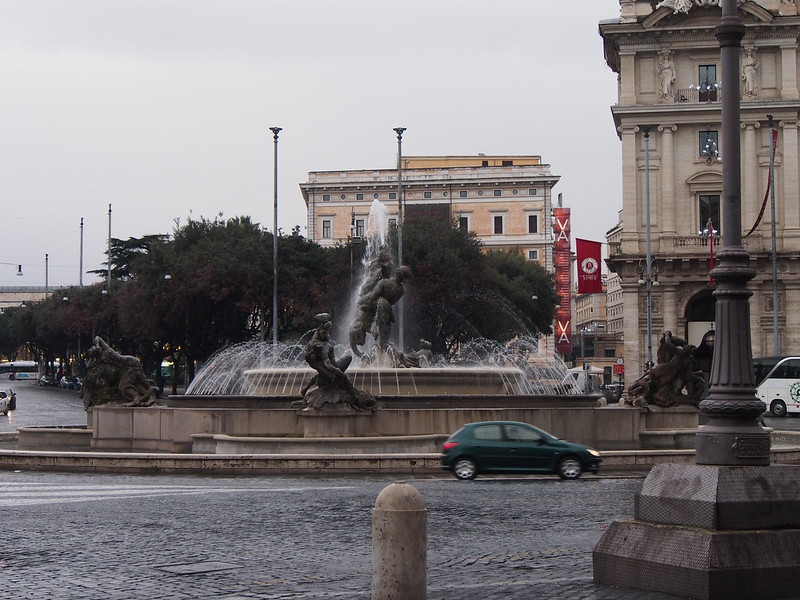 Roaming the (cobbled) streets of Rome

We then walked a fair distance to our accommodation from the metro station. We were expecting the distance, but we didn’t account for our travel fatigue, or the whole stretch of cobbled streets which placed our luggage wheels at risk.

But we made it all in one piece, by God’s grace. 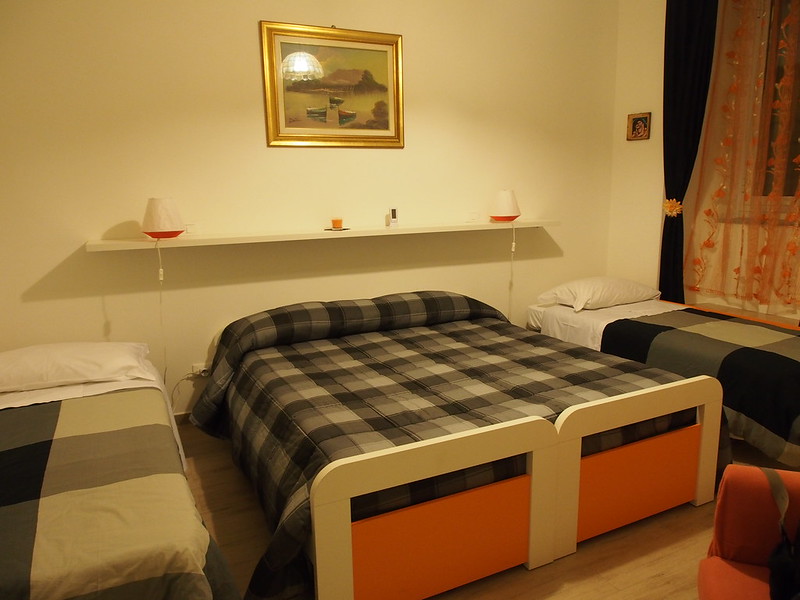 Making it to our cosy abode

And upon settling down and rushing down to the Colosseum 1hour before closing time, it poured after we finished touring.

That called for a dash through the rain back to our accommodation from the metro stop, along the streets of Rome. 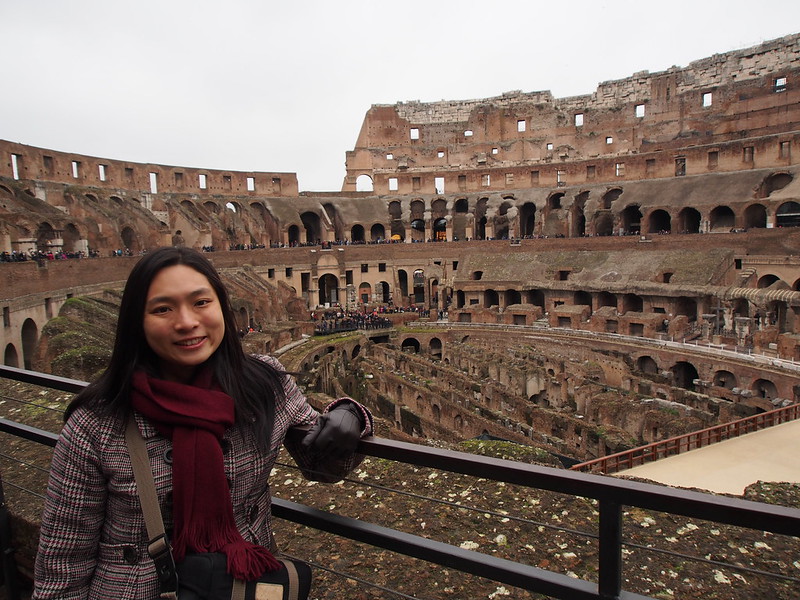 Making it into the Colosseum, despite the long queue! Yay! 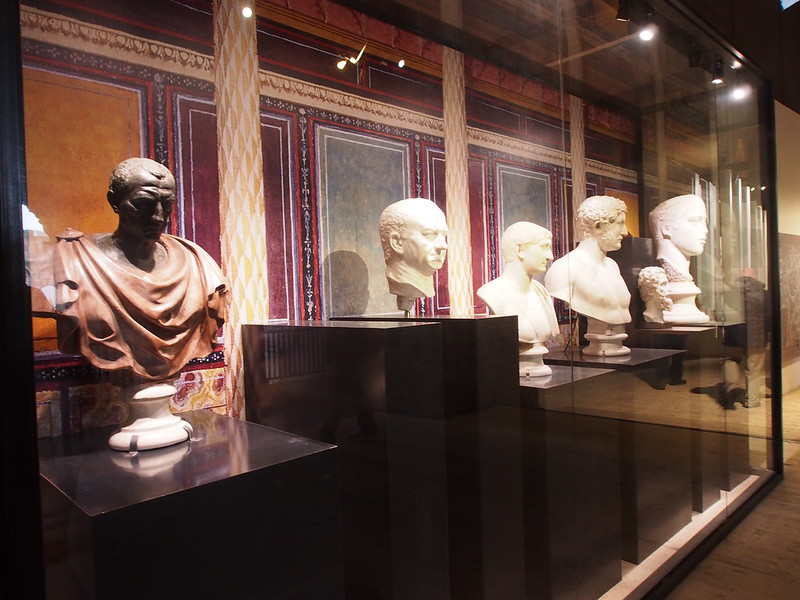 Museum inside the Colosseum. It was out in the open and the strong winds made it really cold touring the place. 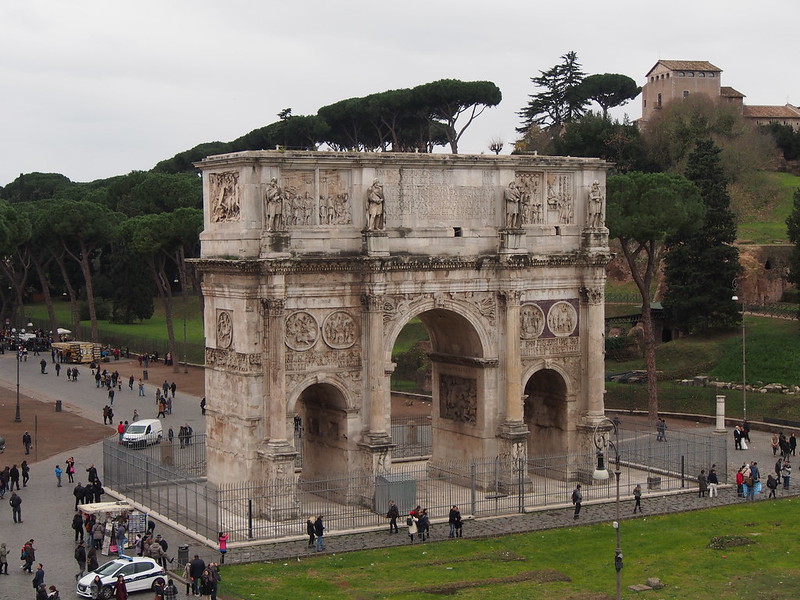 Roman ruins that we spied from the Colosseum 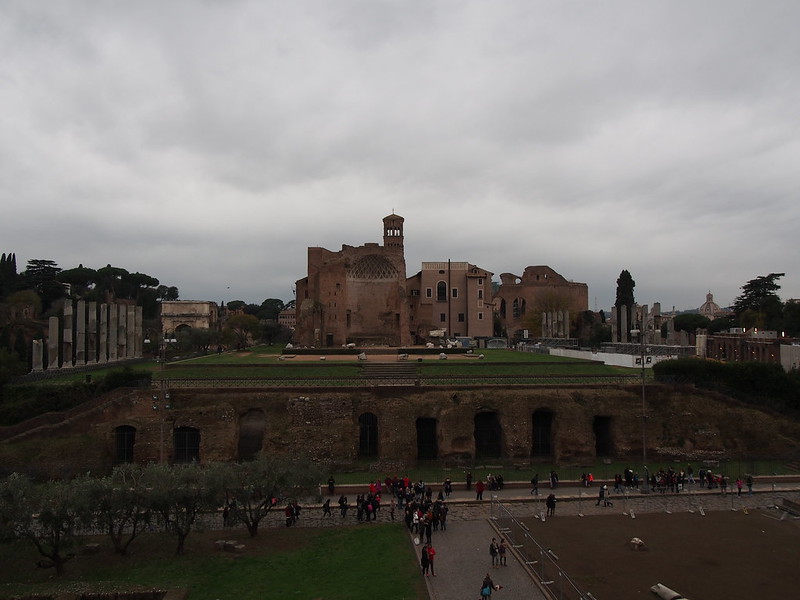 We planned to walk around these ruins after the Colosseum, but then the rain came… 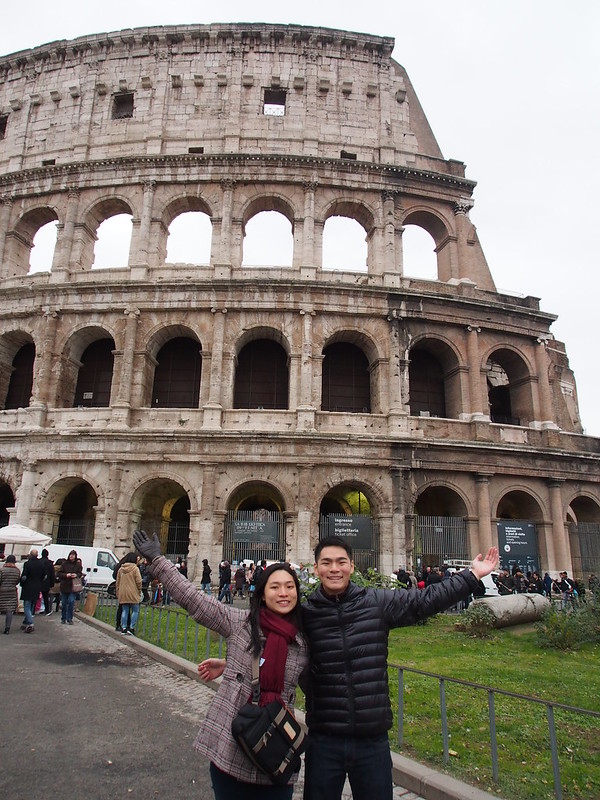 Just before the rain came pouring

So that how it was like when we first came to Rome – a little unnerving by the attempted pickpocketing, cold and wet.

The natural inclination was to stay in our accommodation, safe from the outside world. But our hunger directed us otherwise. So we braved the streets of Rome again, in search for the recommended dining spots by our AirBnB hosts.

And I guess, that’s when things started to pick up a little in Rome. 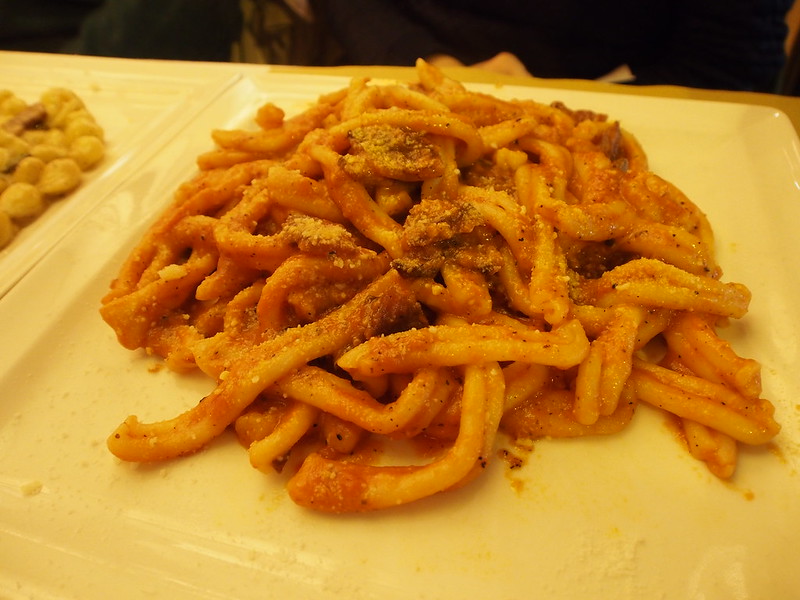 Given such a dampening start (pun intended) to Rome and disappointing meals in our previous spots in Italy, we were not expecting much. Just a quick meal and an early night were all we wanted. 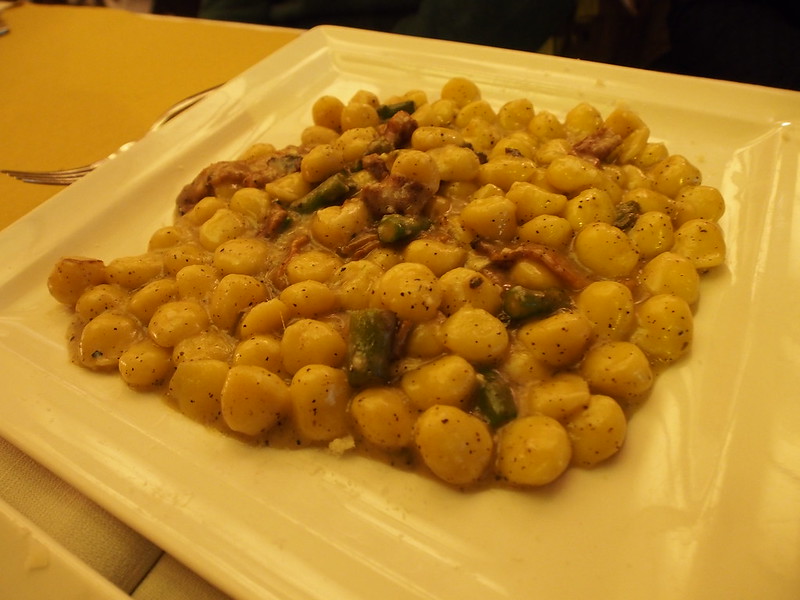 Gnocchi with asparagus, bacon and mushrooms in a cream-based sauce 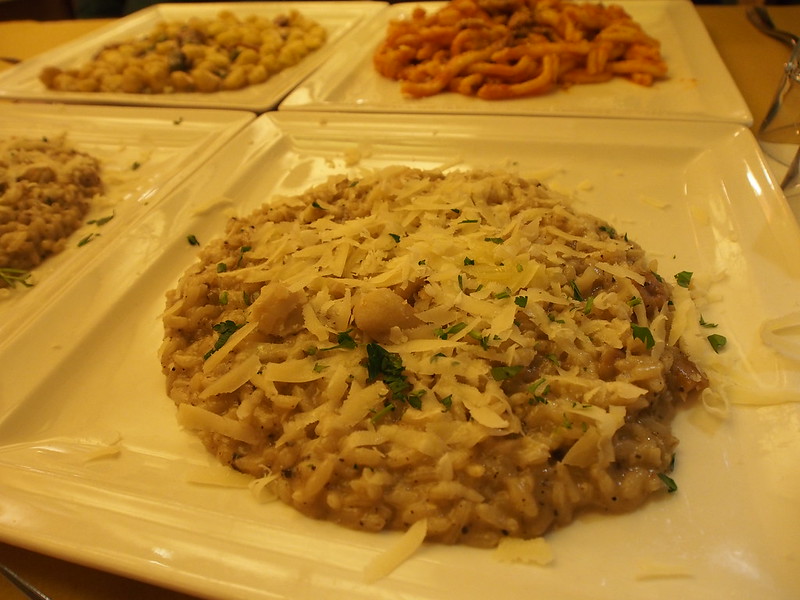 Risotto with truffle, parmesan and chestnut

While the other pasta dishes were good (i.e. pasta done al-dente, sauce not gluggy, simple but good ingredient combination), that risotto, my friends, was the show-stealer.

The risotto was cooked perfectly, and my brother and I loved how the intense taste of the truffle and parmesan was made lighter by the chestnut, which lent a delicate nutty taste. Every bite was so appetising!

The restaurant had a wood-fired oven as well and the pizzas looked really good. But we had sandwiches for lunch that day so we didn’t feel like having more bread.

Anyway, the pasta dishes satisfied us sufficiently and the best part was, each dish was about 10euros. What a difference to the overpriced and low-quality food we had previously!

Seeing how promising our hosts’ recommendations were, we decided to try another recommended gelato place, despite the cold weather. 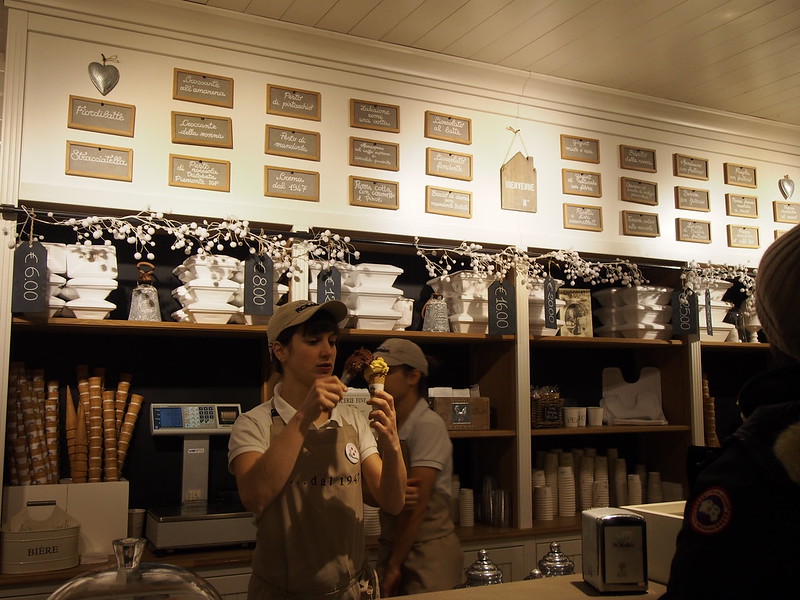 Sooo many flavours to choose from! 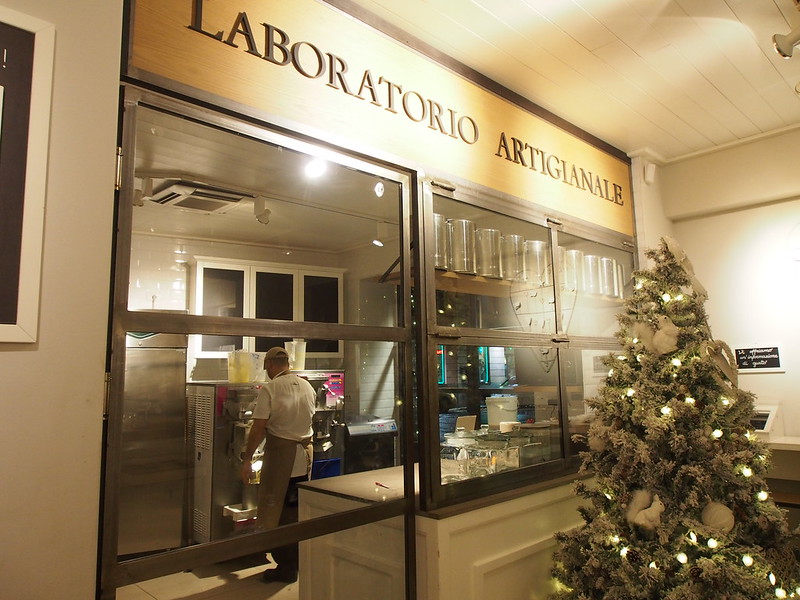 Do not disturb. Gelato lab experiments in progress. 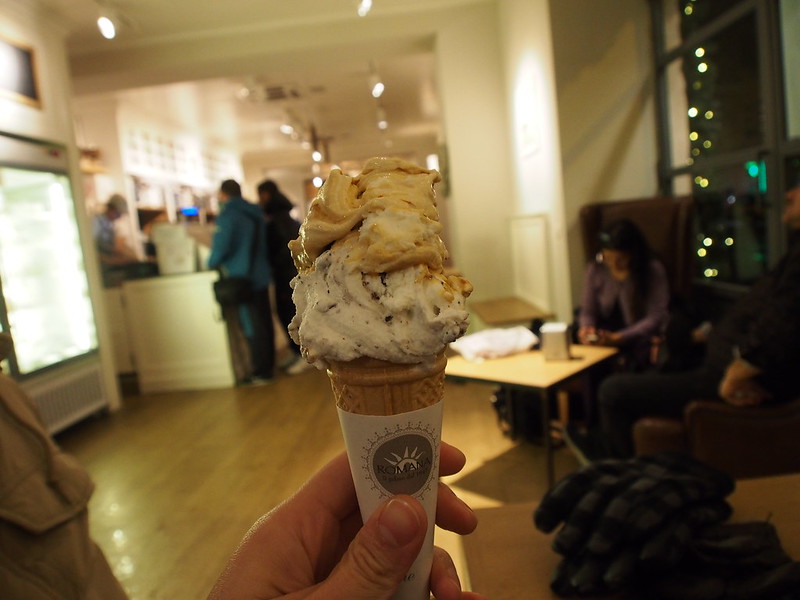 What we finally chose – Ricotta & Fig and Stracciatella

YES – we finally got a good gelato in Italy! The flavours all sounded really interesting and worth a go. We were quite happy with our scoops – the Ricotta & Fig had a caramelly taste going with some creamy cheesiness, and the Stracciatella didn’t disappoint.

And can you believe this cone only cost 2euros? Whoop!

So that was our first taste of Rome. Did we experience the best of what Rome could offer us?

I guess we missed out on quite a few things but at least, we ended our first night in Rome on a good note. With full tummies and contented hearts, we were just thankful that we survived all these as a family, with God in control.

And that I guess, gave us some travelling memories to tell of, of the time when we were in Rome.

Having ended our night with good spirits, that gave us enough energy to wake up the next day at 6am. Why did we bother crawling out of bed while the sky was still dark? That would be another post to share… stay tuned!