The hint of Jinda Thai’s popularity was already given when I tried to call 2 days before to book a table.

The staff who took my call said that they were ‘fully booked’ but ‘feel free to walk in’. I found that a little strange; I mean, how can you get a table if the restaurant is fully booked?

But as I’ve been wanting to go there for awhile now, I thought we would give it a go. After all, it should be easy to get a table for 3 right? 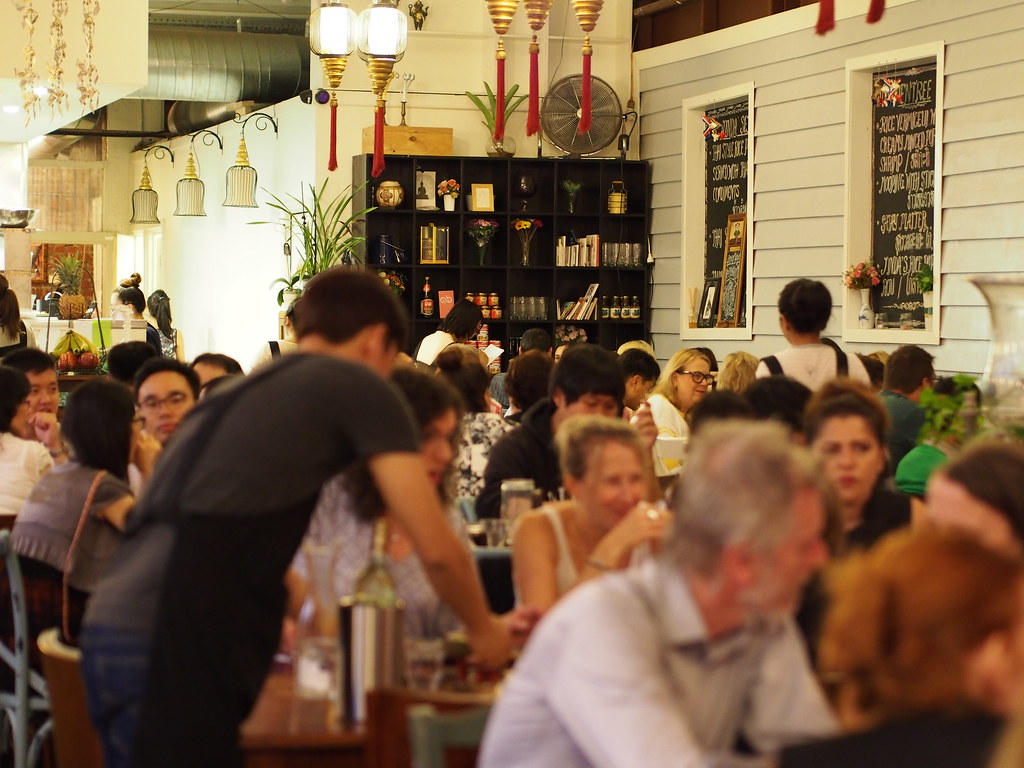 As you can see from the above, the restaurant was packed on a weekday night.  Ann got there first and she was told it would be a 30minute wait. There was a huge crowd in the waiting area as well.

So we waited, and waited. 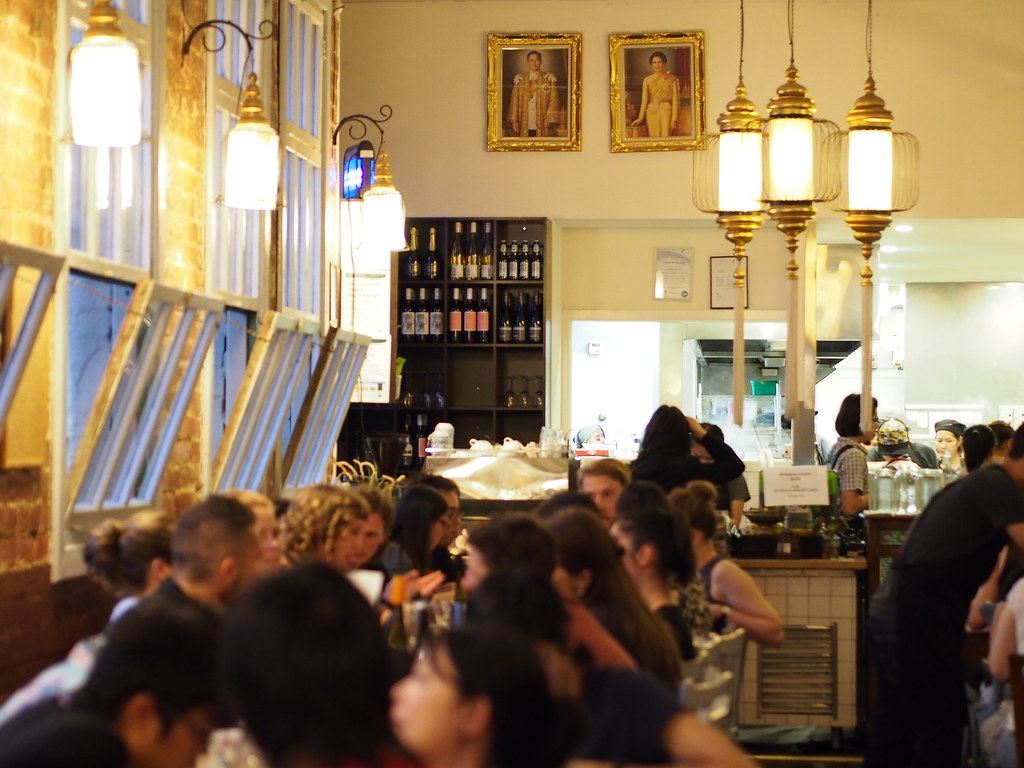 Finally, Ann went to check with the waitress and found that her name was dropped out of the waiting list (?!). Ann told the waitress we had been waiting for 30minutes already and we were bumped up to 2nd on the current wait list. But that meant more waiting!

Seeing how others on the waitlist were dropping like dead flies, I was also ready to give up. But Ms JQ really wanted to try out Jinda’s food so I relented. 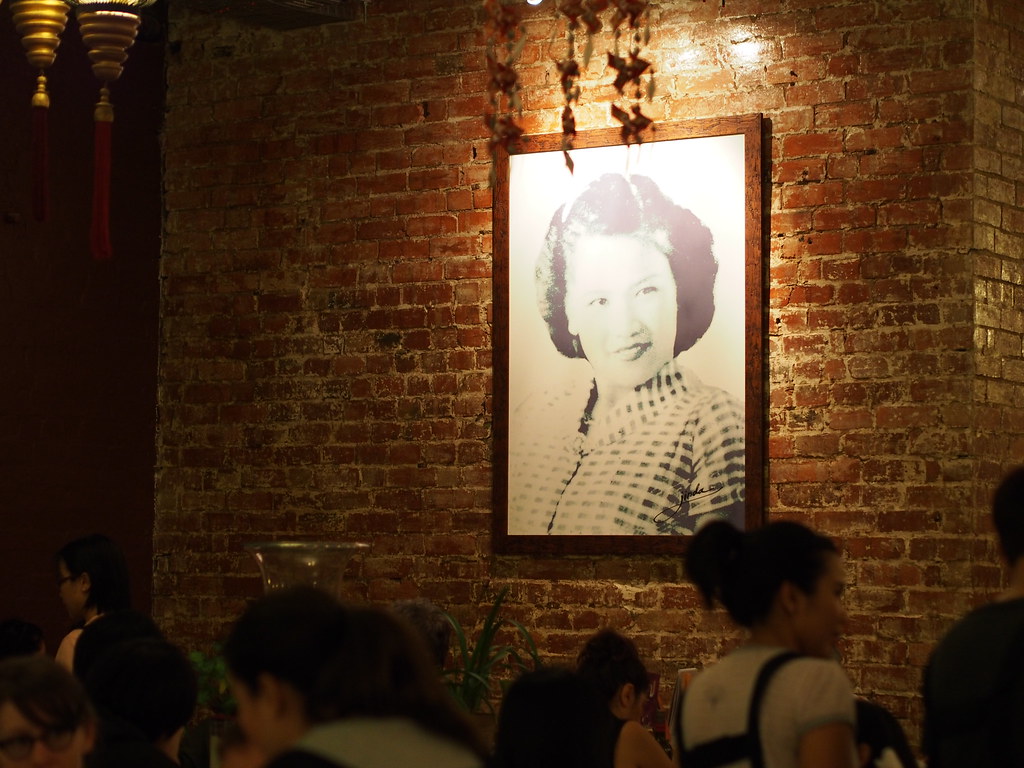 And yes, finally, at the 50minute mark, we were told that they had a table for us – hurray!

Seriously, in my entire history of dining out in Melbourne, I’ve never waited that long to get into a restaurant. Maybe there were those times at Chin Chin and Beatrix but never up to 50minutes, never.

Upon being seated, we immediately placed our orders – we had a long time to study the menu, duh!

And just before it made it to my blacklist, the restaurant found its way to redeem itself – our orders were served out pretty quickly, whoop!

And I must say, this first dish that was set before us looked pretty impressive… 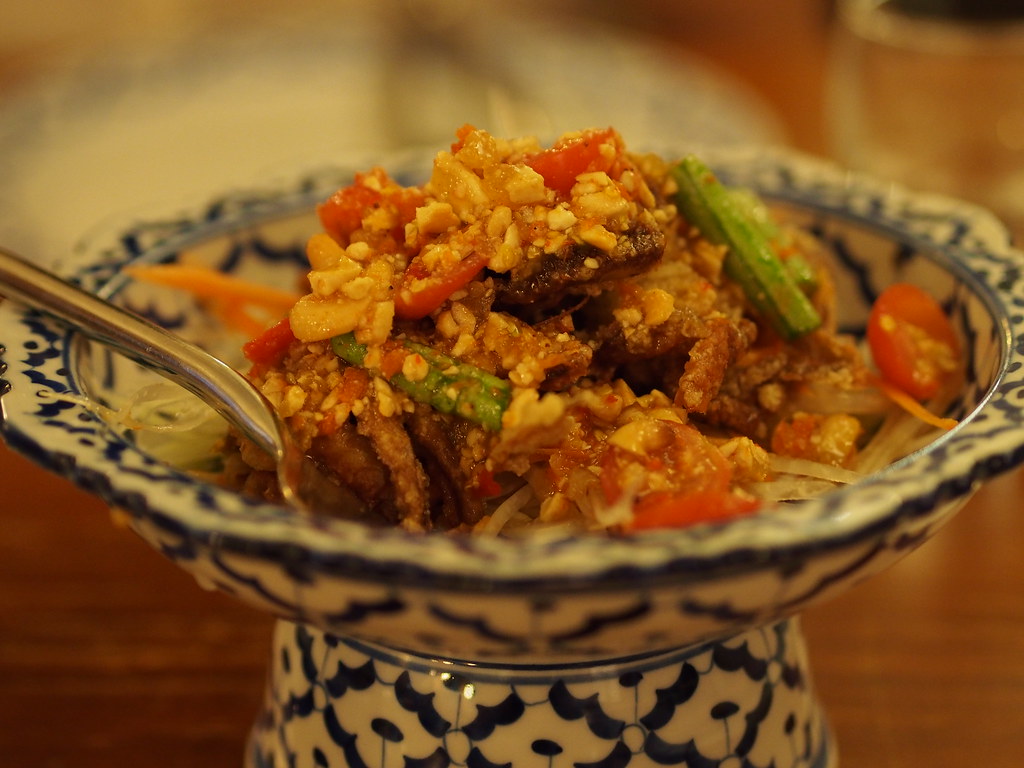 Wow, upon the first crunch, it was so good. No, this is not hunger talk. The flavours on this dish was impeccable – sweet, salty and fresh, brought out by the mix of fish sauce, sugar, nuts and thinly sliced radish. In fact, I found myself slurping on the dressing after the soft shell crab had been demolished! 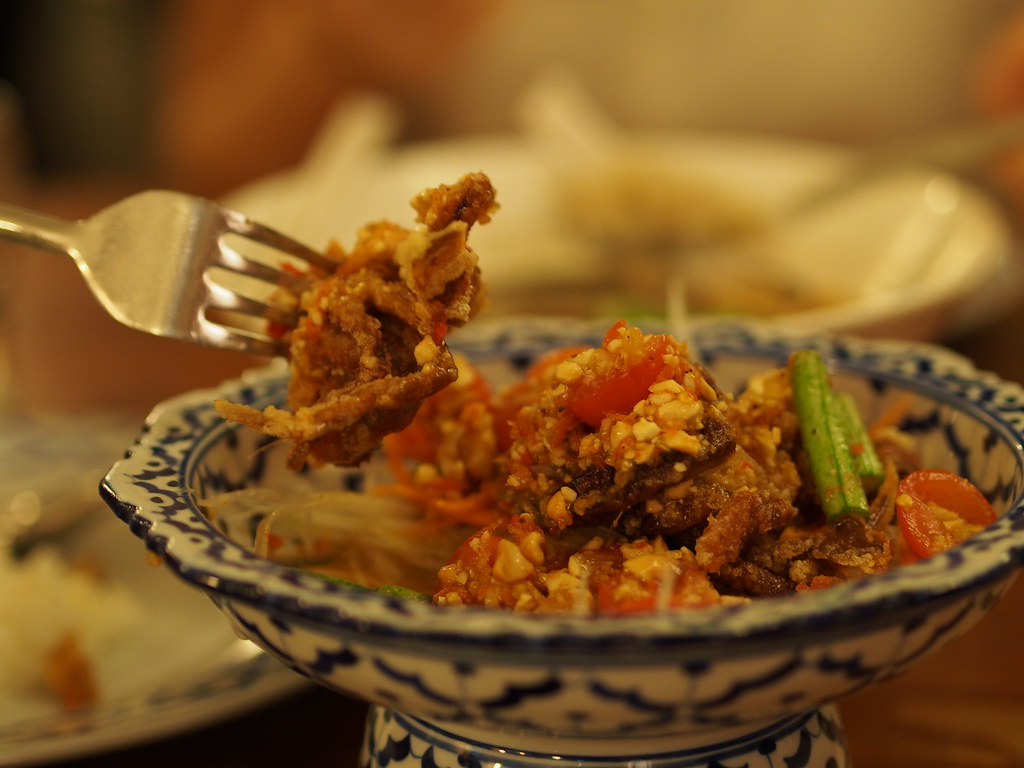 I found this particular dressing quite similar to the flavours in Chin Chin. But unlike Chin Chin, there was more of a spicy kick in this dish and it wasn’t as sweet. A really good appetiser to kickstart the tastebuds (not that we really needed that after all that waiting haha)! 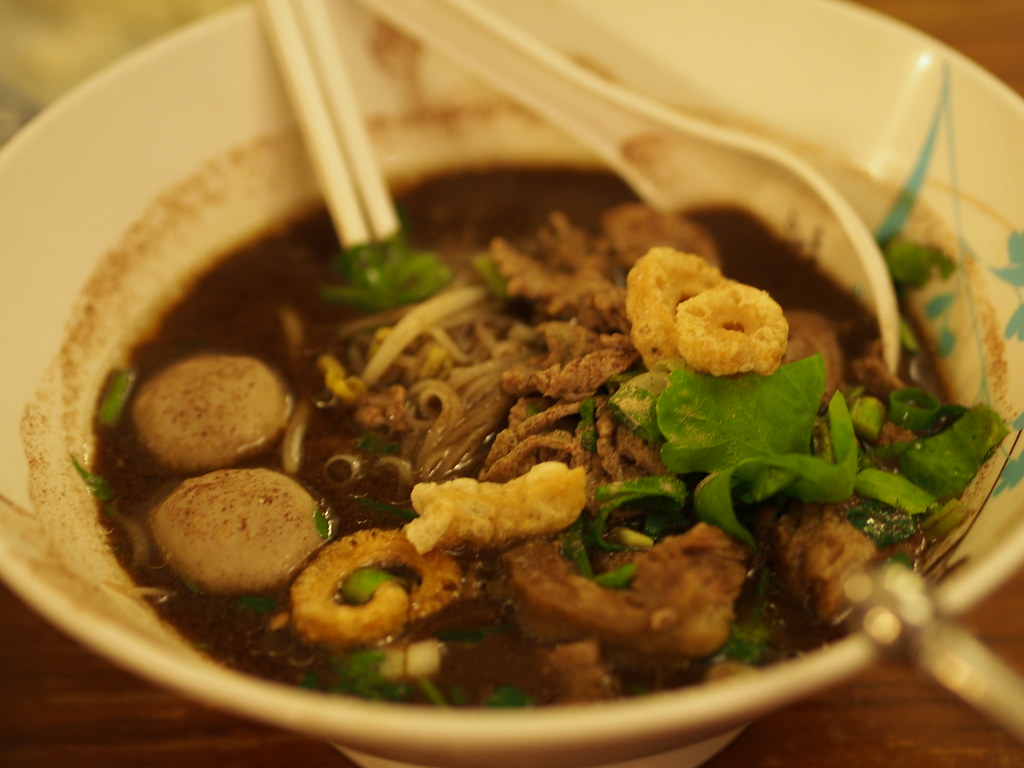 We ordered this because I’ve heard a lot about this and personally, I’ve never seen this dish featured in any Thai restaurants.

It seems like a lot of Asian countries have their own beef noodles and I guess this would be the Thai version of it. There was that thick beefy broth and fat pieces of pork lard for that crispy texture. And for the final touch, there was shards of coriander to give it that fresh edge. 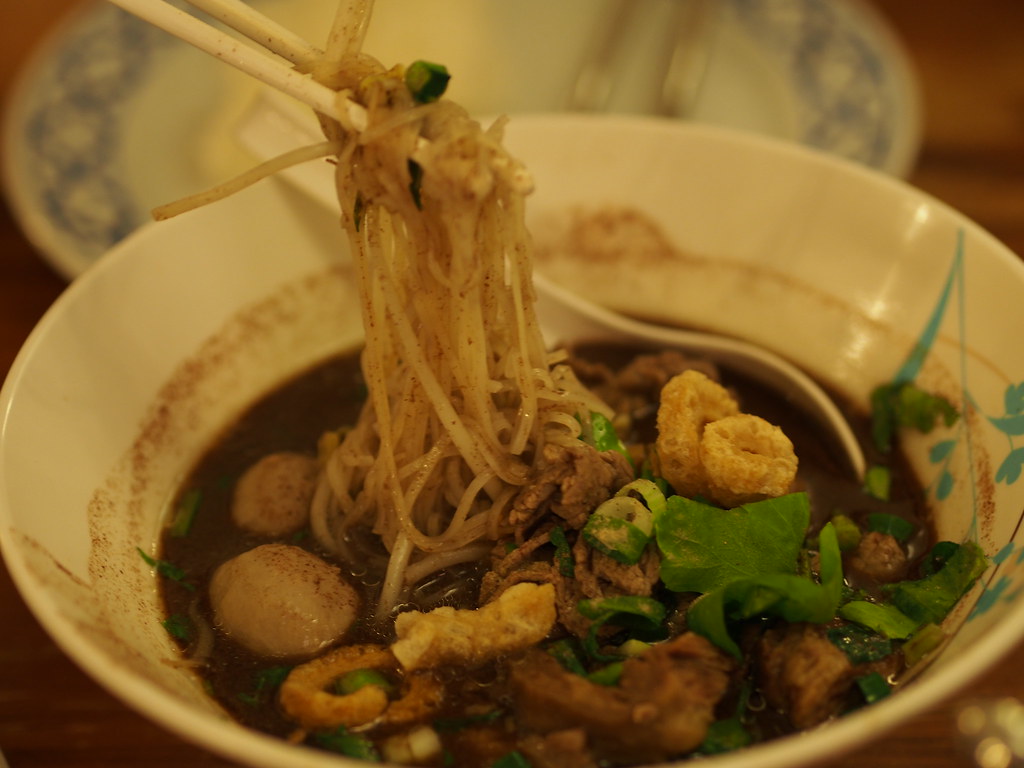 The noodle texture was absolutely beautiful – not overcooked with abit of bounciness left. I wonder if this is made in-house!

It was such a good bowl of noodles – we absolutely lapped it up! 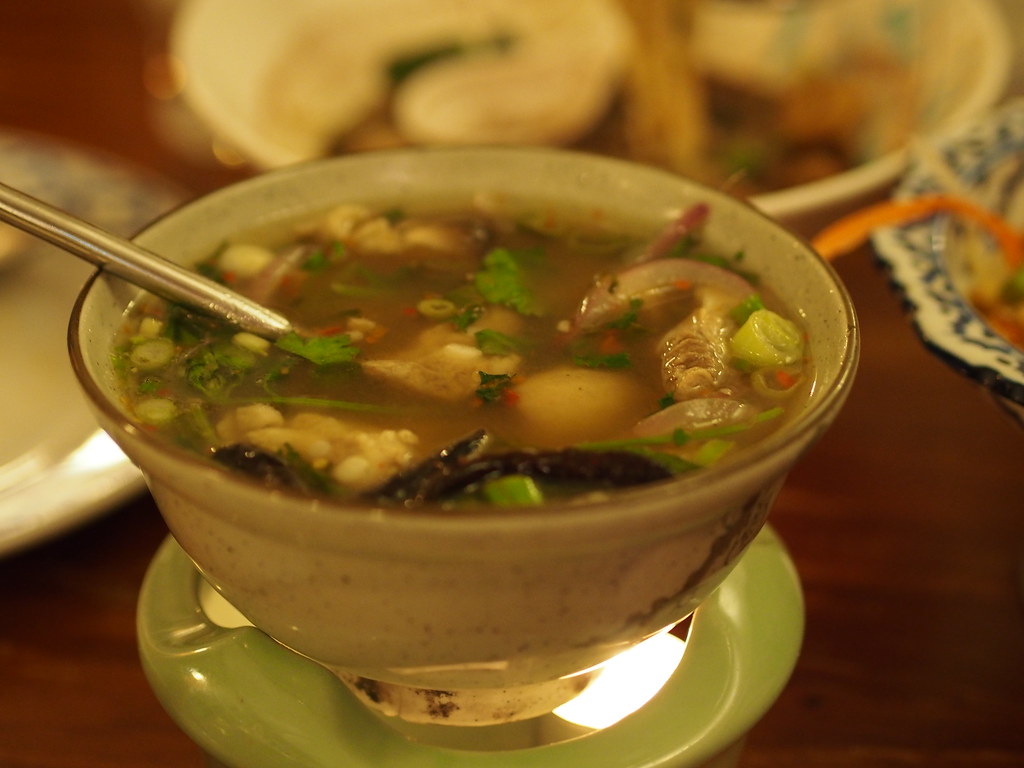 I’ve heard good reviews of this dish and have never tried it before at a Thai restaurant as well.

So what does it taste like? Think of this as the Tom Yum soup with a pork broth and with a less sourish taste. 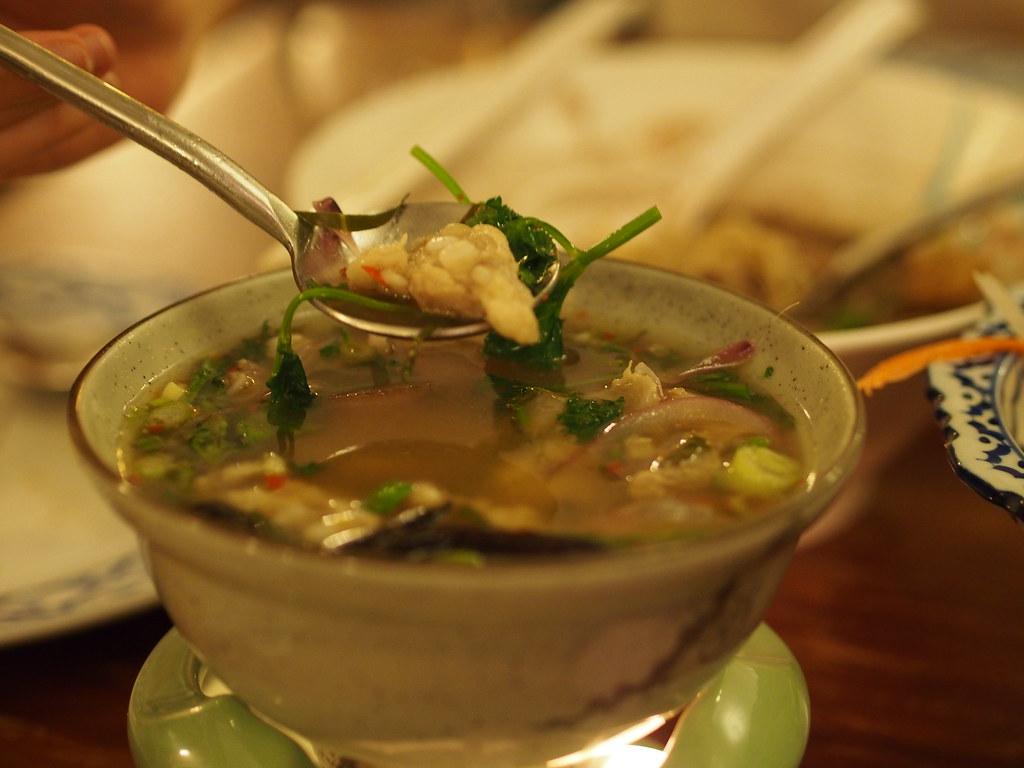 And let me warn you, this dish is SPICY. As if the pieces of chilli AND black chilli in the soup aren’t enough, you are hit by a peppery aftertaste with each spoonful of soup – this is definitely not for the faint-hearted!

We found ourselves slurping one spoon of the Tom Sab and then quickly scooping another spoonful of the Boat Noodle broth to counter the spiciness. Soooo delicious but soooo spicy! 😛

Although there were many other items on the menu that looked delicious, we decided to save our tummies for dessert… 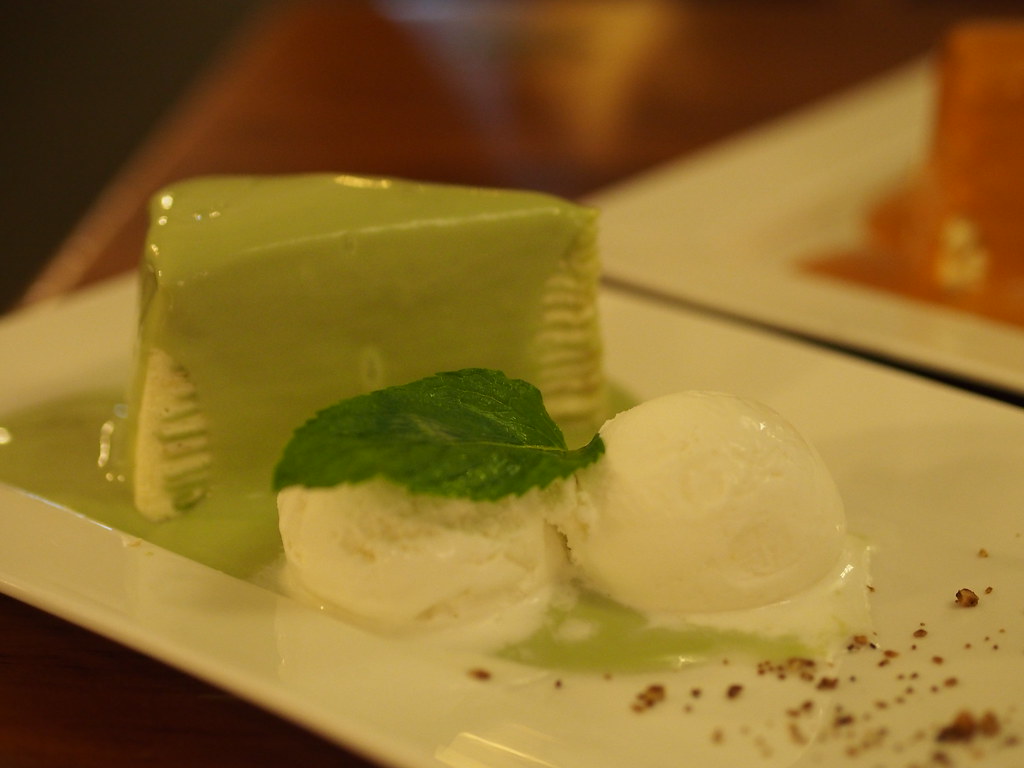 Yes, this is the famed crepe cake that Jinda is known for. And because they come in so many flavours (Pandan, Matcha, Taro etc.), we just had to get another one… 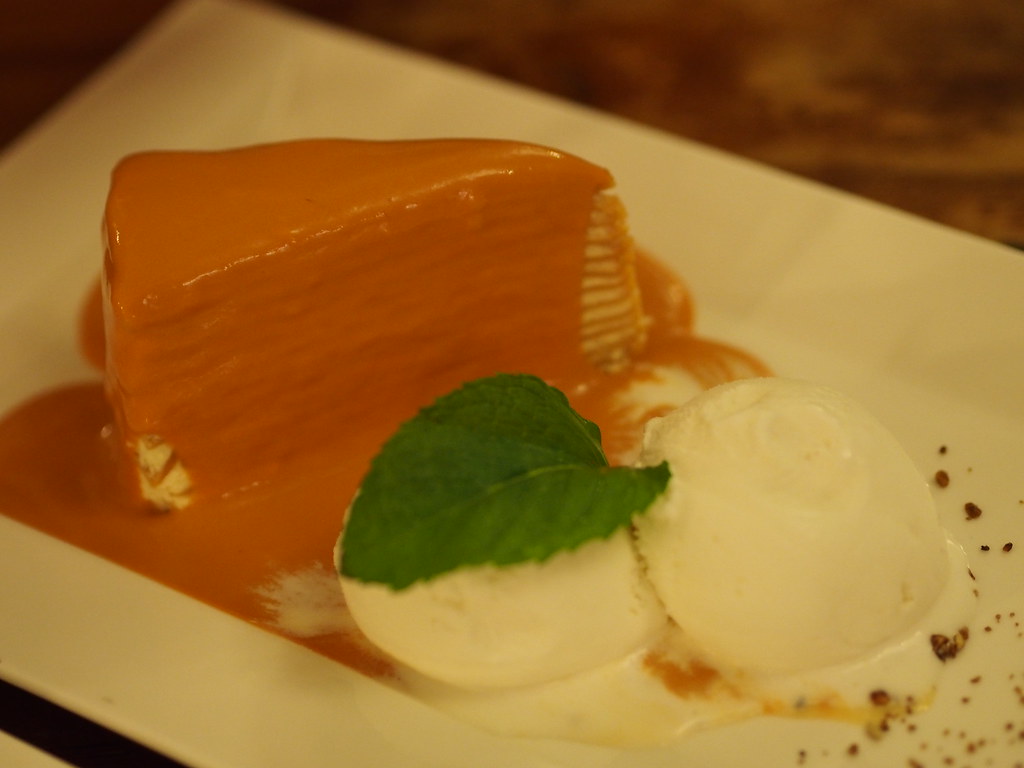 And yes, these cakes have earned their reputation well. They are like flavoured kueh lapis and the accompanying sauces totally sealed the deal.

The 3 of us were split on which cake we preferred. Ms JQ and I liked the Thai Milk one because well, we like the taste of milk tea and this flavour was really brought out in the cake. On the other hand, Ann found the Pandan one more unique and she liked the floral edge to the pandan flavour. Oh well, each to her own! 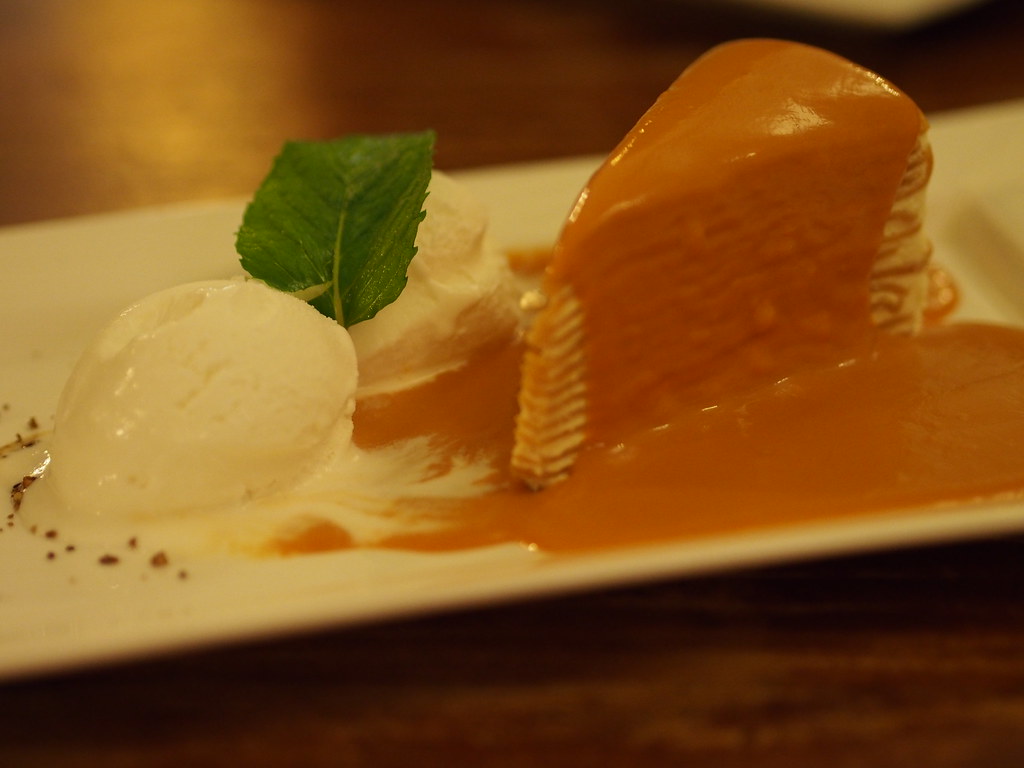 We really could not fault the food we had that night. I daresay that Jinda has become my all-time favourite Thai restaurant, thus earning a spot in my Top Pick category!

Now I understand why Jinda is so popular and of course, my only gripe would be the wait time we had to endure. So if you’re thinking of checking out Jinda, I highly recommend making a reservation – you wouldn’t want to start off your meal on a grumpy mood!