Two things – firstly, it was an overdue appointment with Daimz and Ms HH who had promised to bring me to 1 of their favourite brunch haunts, and secondly, it was a first-time collaboration with Noel whose photography skills I very much admire.

So for once, I didn’t have to put on my thinking cap of where to brunch or bring out my camera, and let the pros do their thing… certainly something that I was looking forward to!

Anyway, Daimz and Ms HH took me to Balaclava. I have not been there but they said that it was a nice suburb which is predominantly Jewish.

And of course, there was something about the food there, and we were there to discover what Balaclava had to offer… 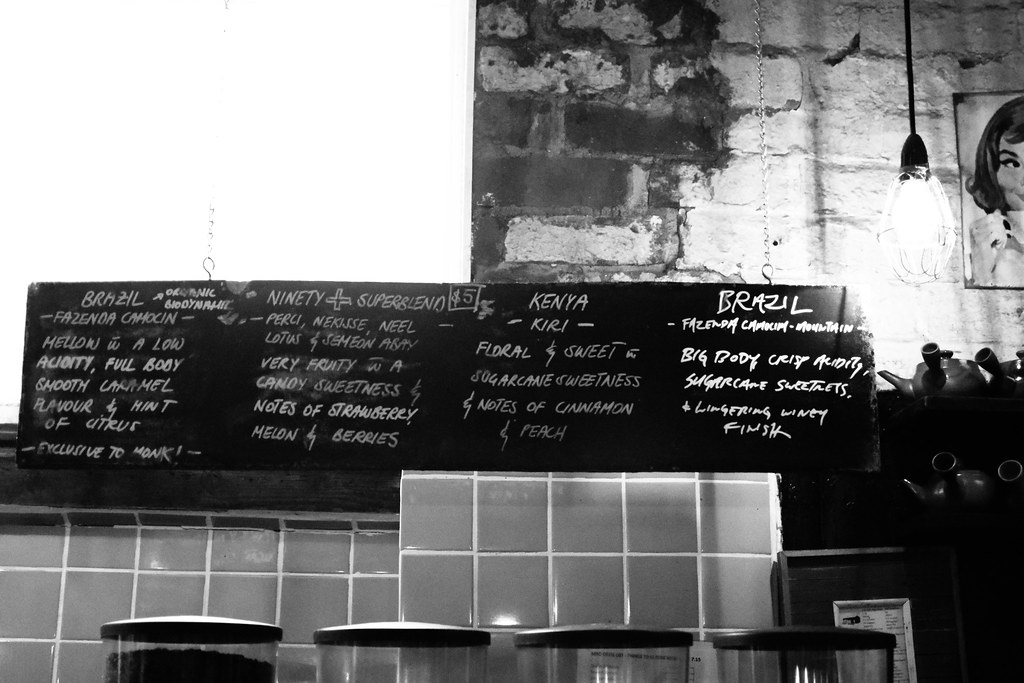 The cafe was teeming with people when we got there but we were there for one thing only – coffee. So we quickly placed our orders for takeaway coffee. 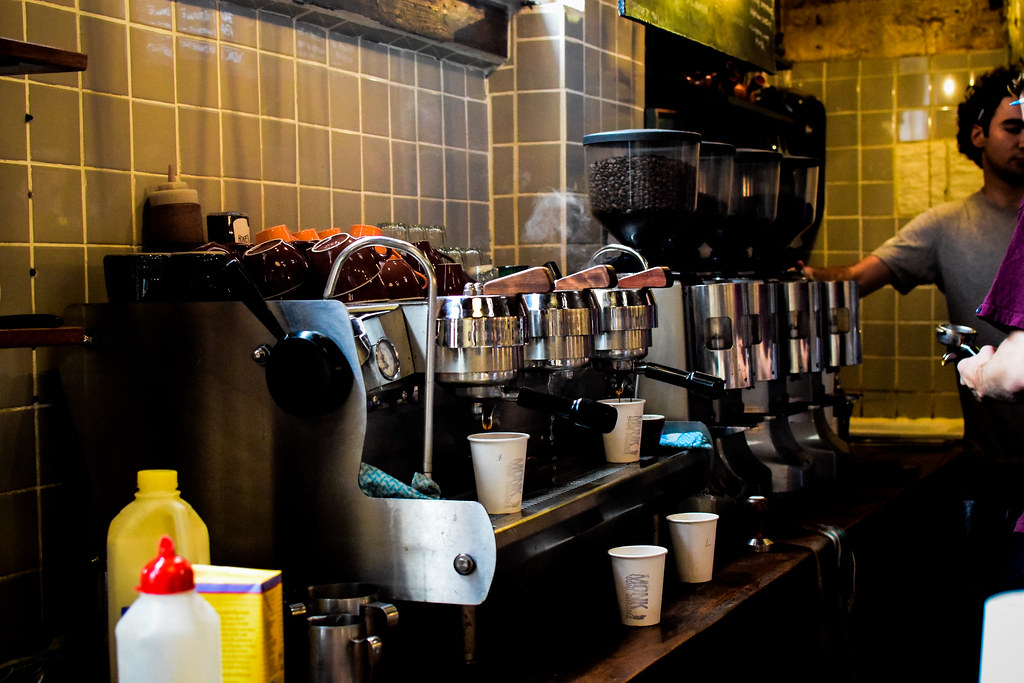 And of course, I stood back to let Noel do his thing 😉 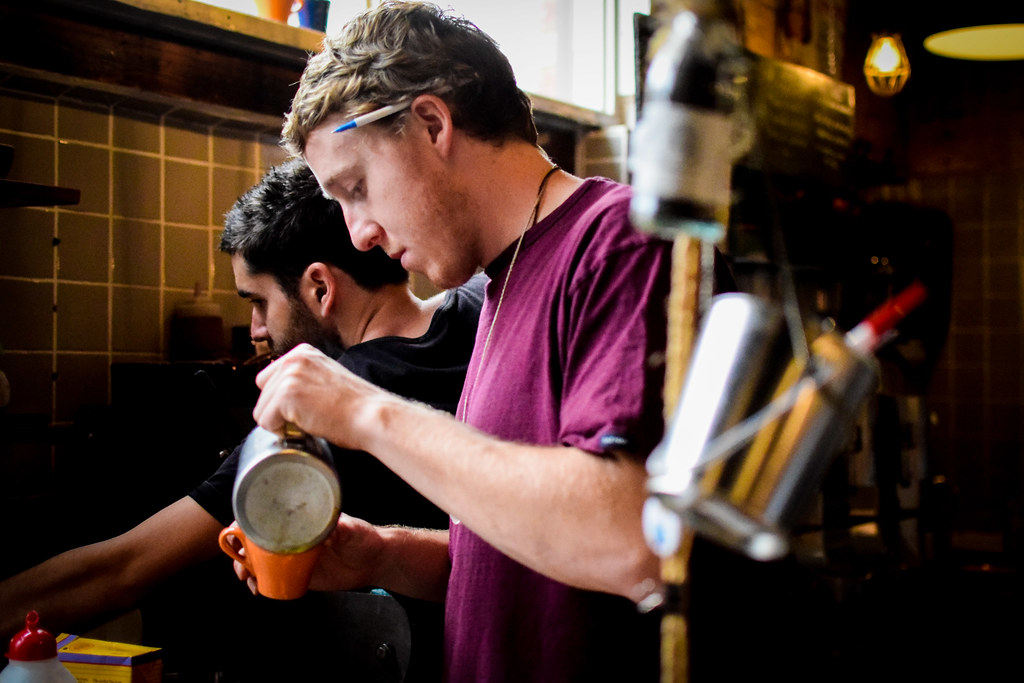 But I couldn’t resist playing with his camera for a couple of shots (I love his prime lens!) – my amateurish take on a portrait shot 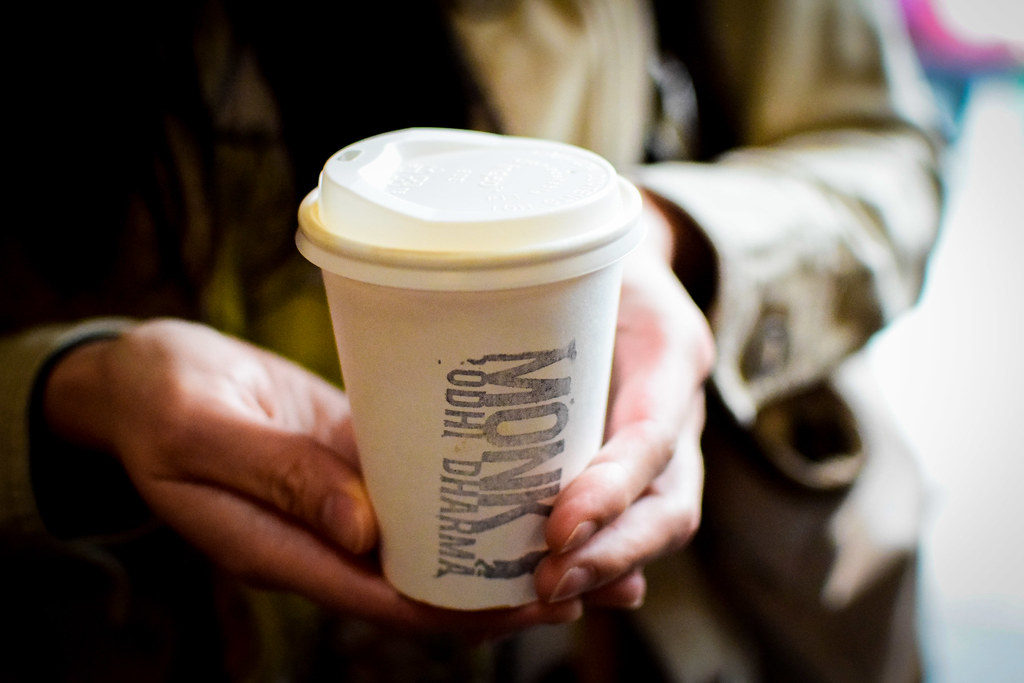 I went for the Brazil blend and it was indeed mellow, as described on the board. It was smooth and finished off with caramel notes.

The coffee was pretty pleasant but I’m not sure if this a top pick for me for coffee. Like what I’ve said previously, I’m more for blends which has dark chocolate and that bitter kick.

Anyway, Monk is supposedly a vegetarian cafe and the menu does look interesting – the cafe also looks really popular so I guess it would be worth giving their brunch fare a go! 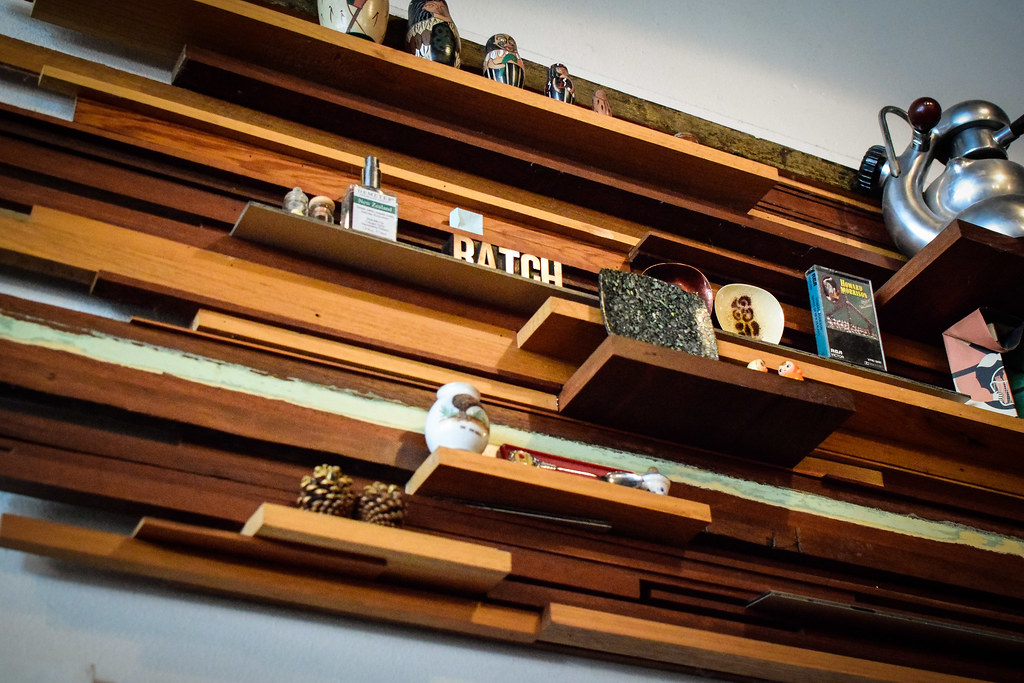 So the reason why we didn’t stay in Monk for brunch was because Ms HH wanted to try out this cafe. 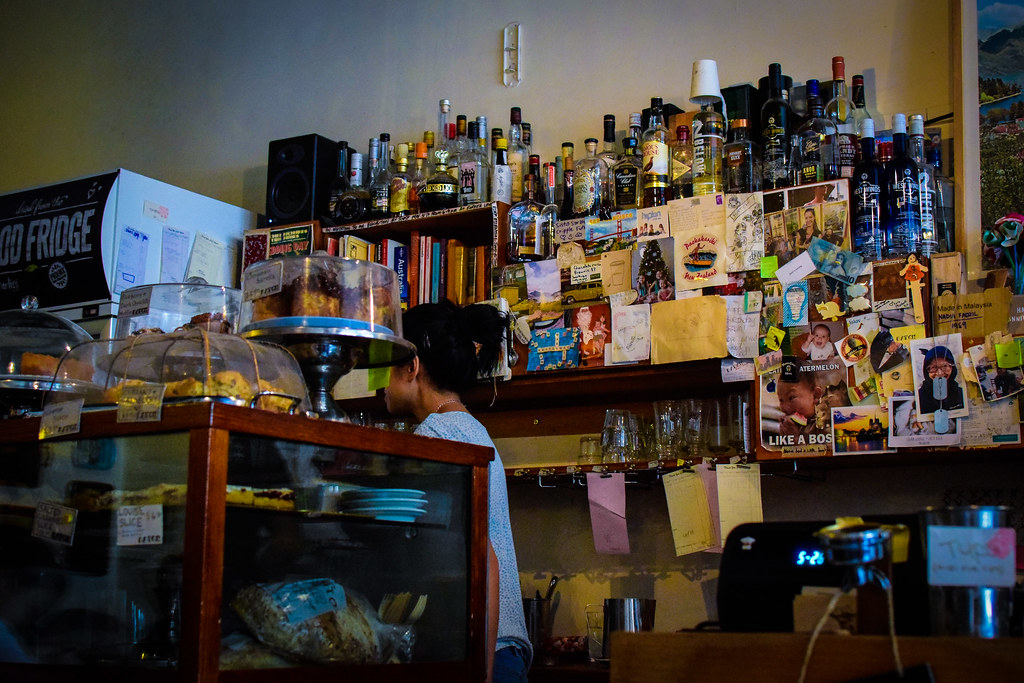 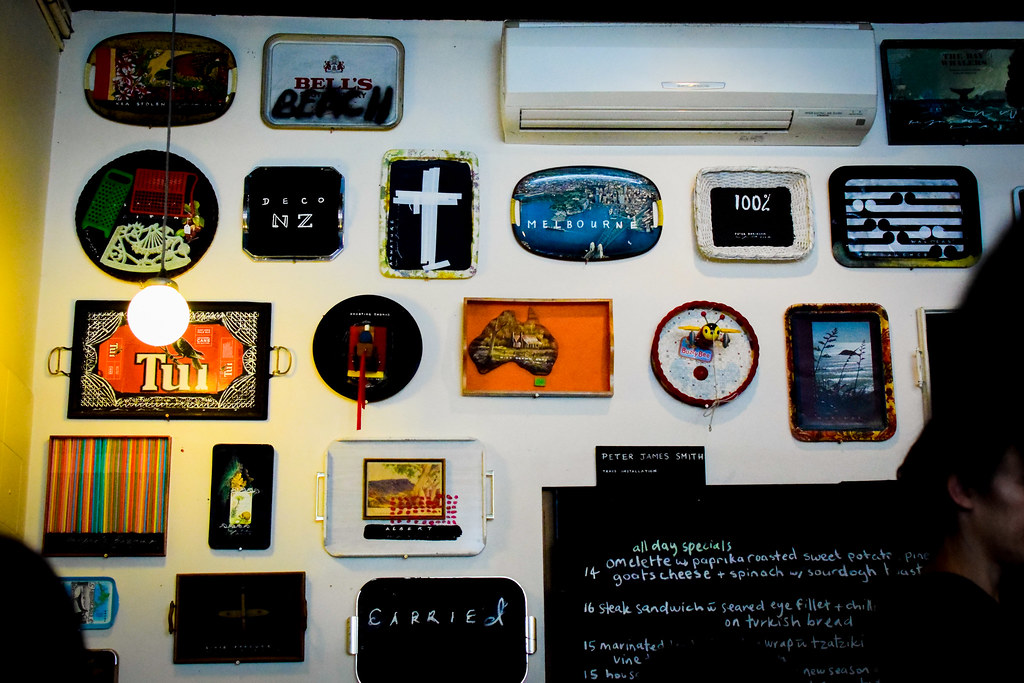 Batch gives out this cosy homely feel with its wooden furnishings and wall decorations. And from the decorations, it is pretty obvious that the cafe is Kiwi-owned! 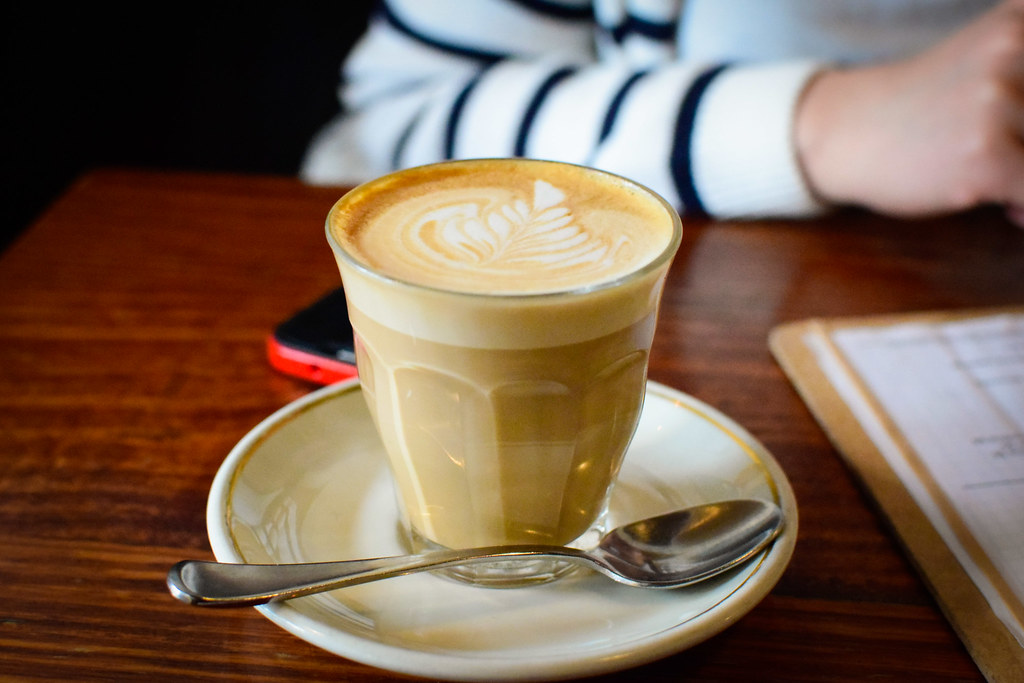 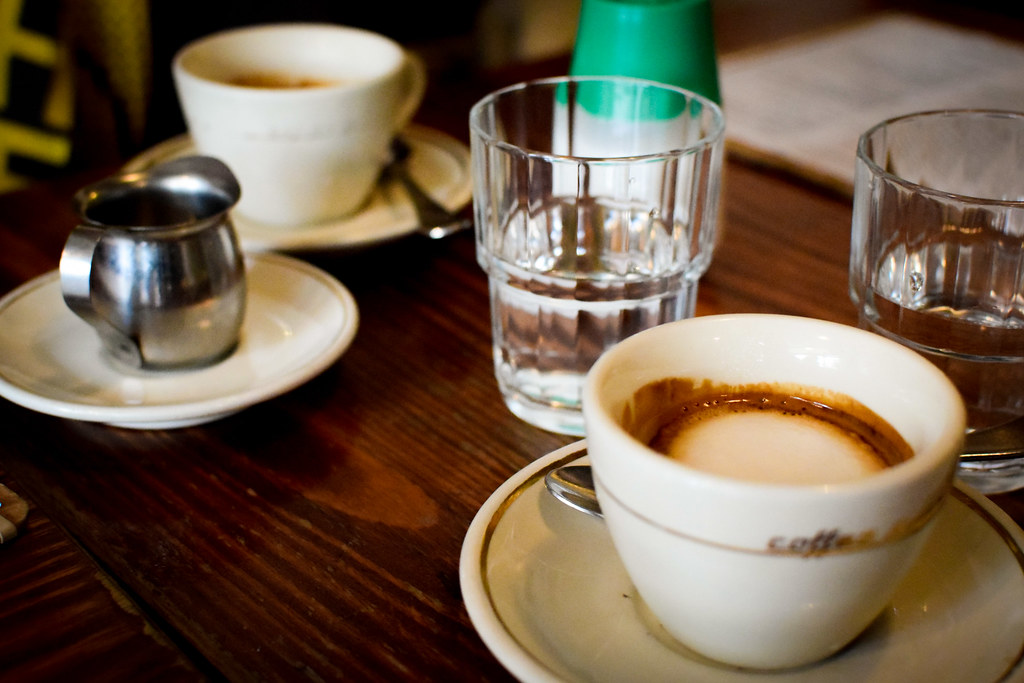 I had hit my coffee quota for the day already so I passed for the coffees. According to the rest, their coffees were all right. 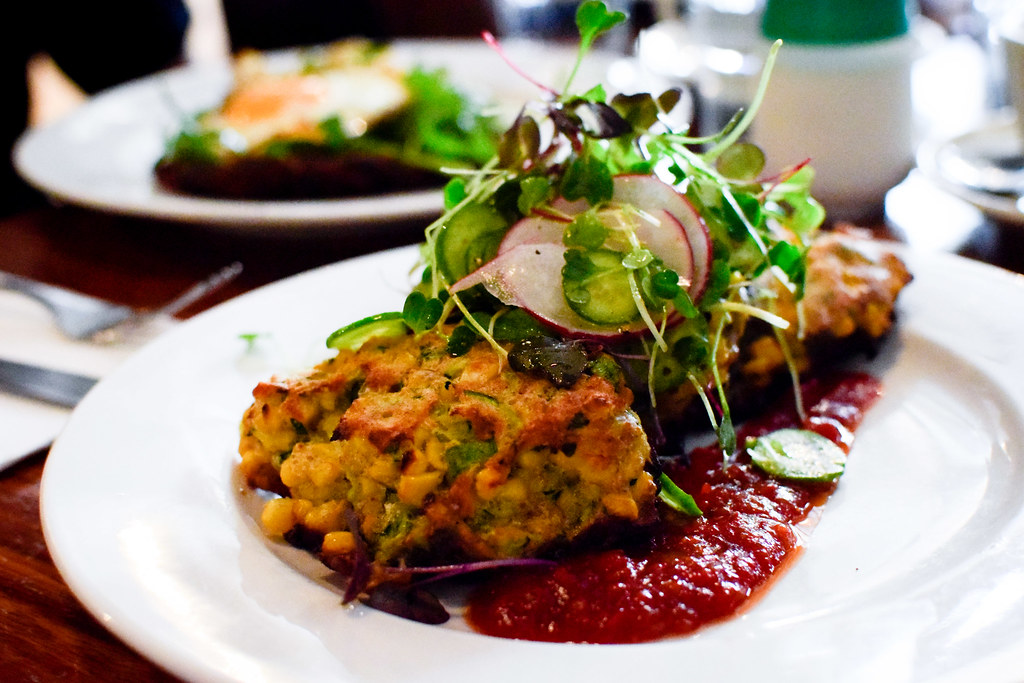 I heard a lot about their corn fritters so I went for that. As you can see from the above, the fritters were practically bursting with corn and zucchini. I really enjoyed the fritters and the texture was just right, not overly-doughy.

As you can also tell, it was a very simple dish with no fancy sides. The relish and salad helped to give the dish some freshness but the main star of the dish was pretty much the fritters. 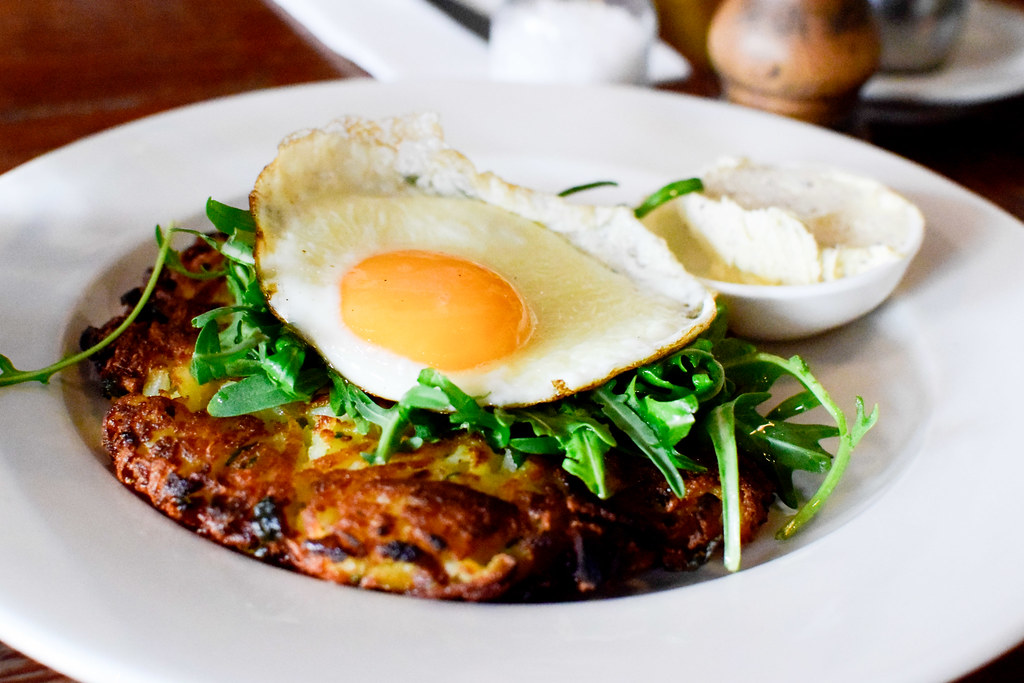 Andrew and Noel went for this dish, while I stole a bite from them. We had good memories of potato rosti at Di Bella and Proud Mary and unfortunately, we didn’t think Batch’s version was as good.

I guess the problem was that the dish was a little dry without the generous serving of gravy that Di Bella and Proud Mary had. We also weren’t big fans of the creme fraiche at the side and we thought it made the dish heavier. 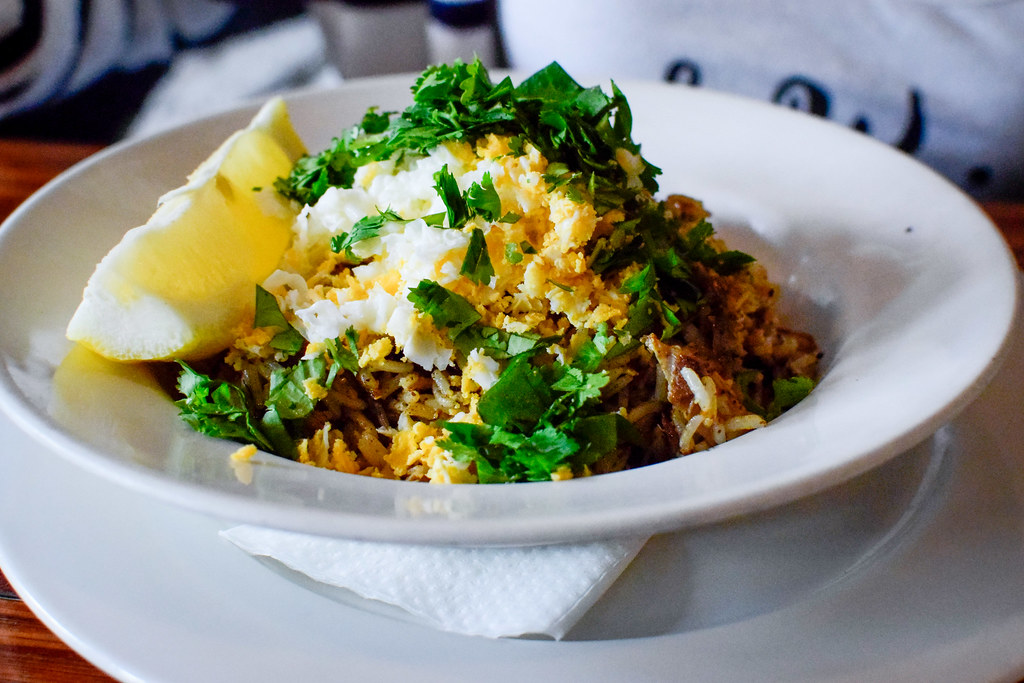 This was a more unusual dish and Ms HH decided to try this out. It reminded me of the healthy superfood kind of fare that we had at Merchants Guild. It was light on the oil and had slivers of fish throughout. 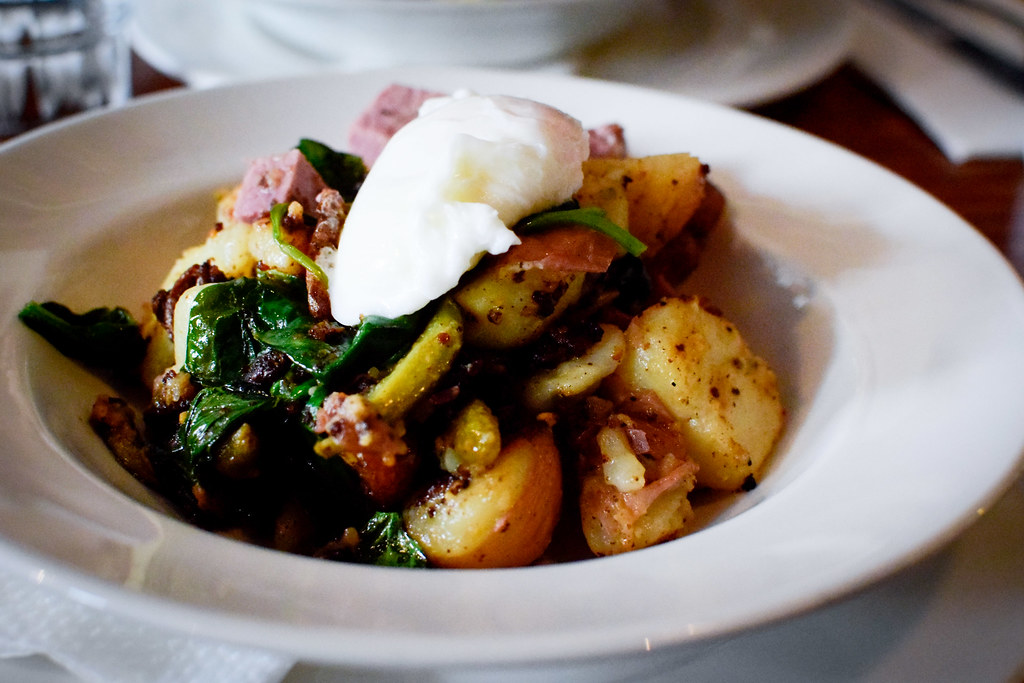 This is what I call a blokey kind of dish and I wasn’t surprised that Daimz went for it. It was hearty with lots of spam and potatoes – it looked pretty filling!

The dishes at Batch are pretty down-to-earth and the prices are quite reasonable, with the dishes being priced around $15-17. While Batch doesn’t quite rank as a top Melbourne cafe for me, I can see that this would be a nice go-to place for the locals in the suburb, to have a simple laid-back brunch.

I would also say that the go-to dish would be the corn fritters – uncomplicated with lots of corn and zucchini in it, I think that would satisfy any fritters’ lover! 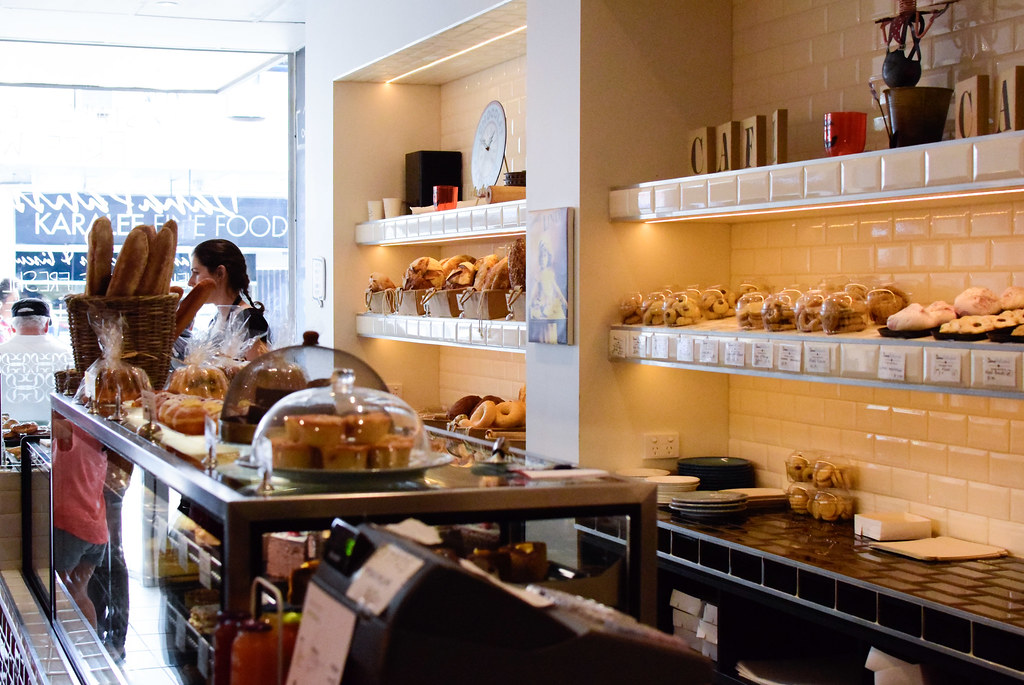 We still had some time to spare so we walked around the shops for awhile. And then we chanced upon this shop – how pretty does it look? 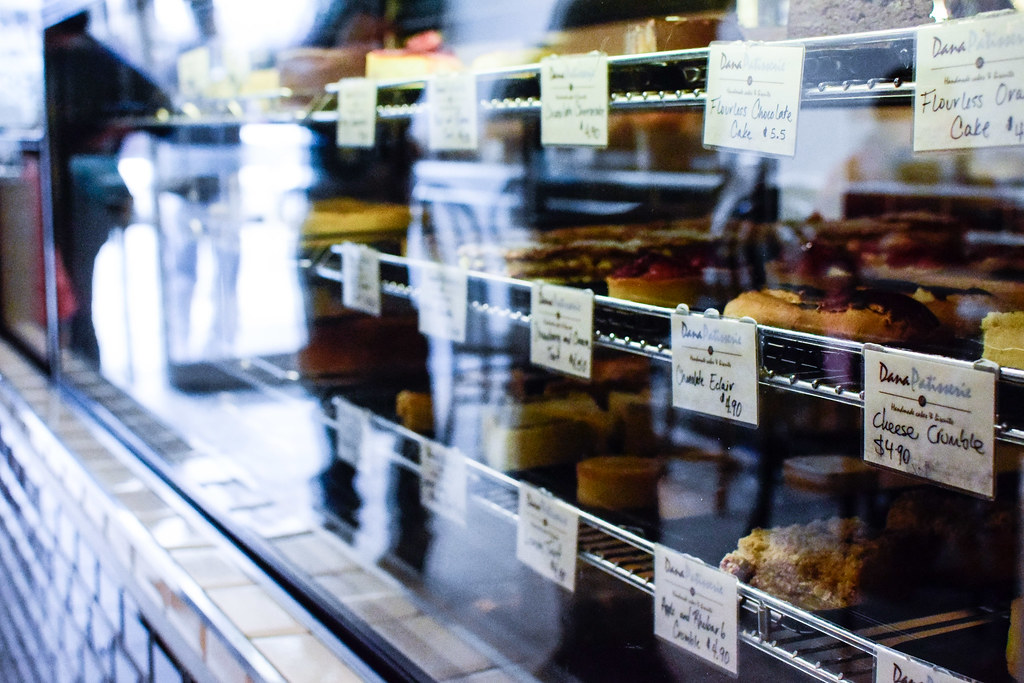 If you’ve been following my blog, you would know that I had pretty fond memories of the local patisseries in France. And this little patisserie in Balaclava may just bring me down memory lane again! 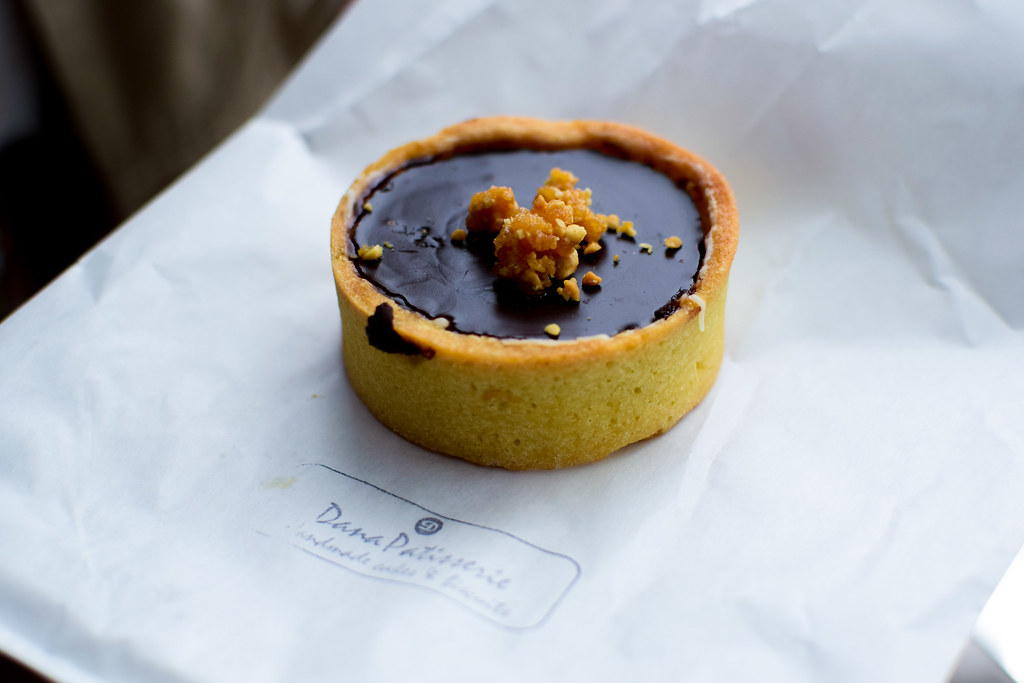 Being a chocolate lover, Noel had this little sweet. He let me have a bite and the salted caramel that oozed out was amazing. Noel found it a little too salty but I thought the salted caramel went just well with the bittersweet chocolate – maybe he has a sweeter tooth than me! 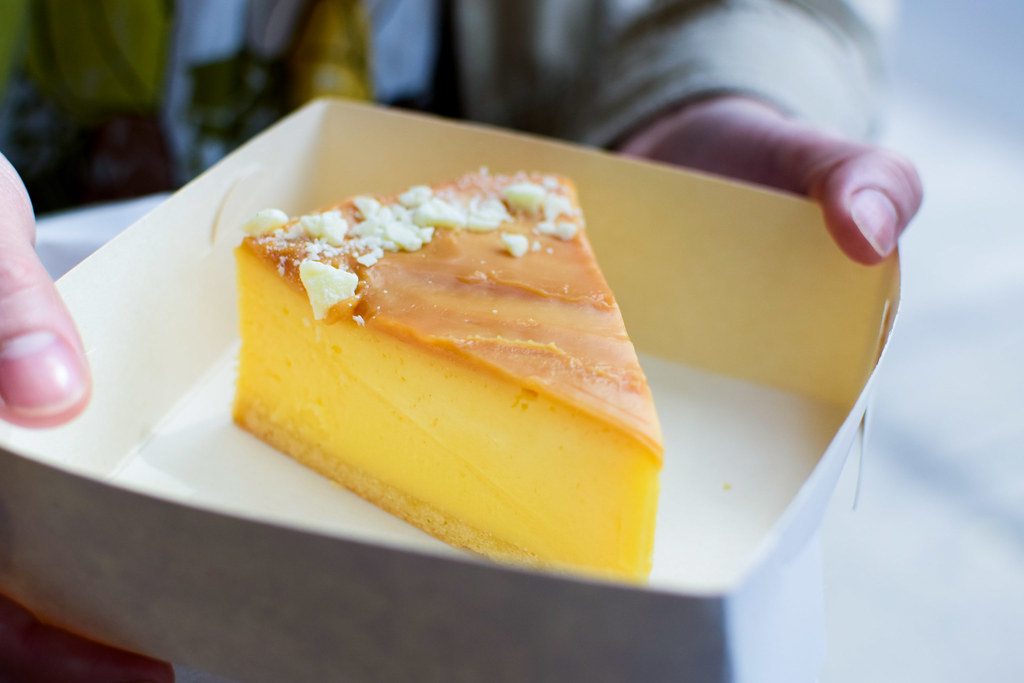 I thought that this would be a simple cheesecake but I was wrong – it was so much more than that. The texture of the cream cheese was really smooth, and I was surprised to find the balance of sweetness just right (I mean white chocolate AND caramel sounds abit like an overkill right?). This was really good cheesecake!

The portion was also quite filling – I could only manage half of the cake and shared the rest. 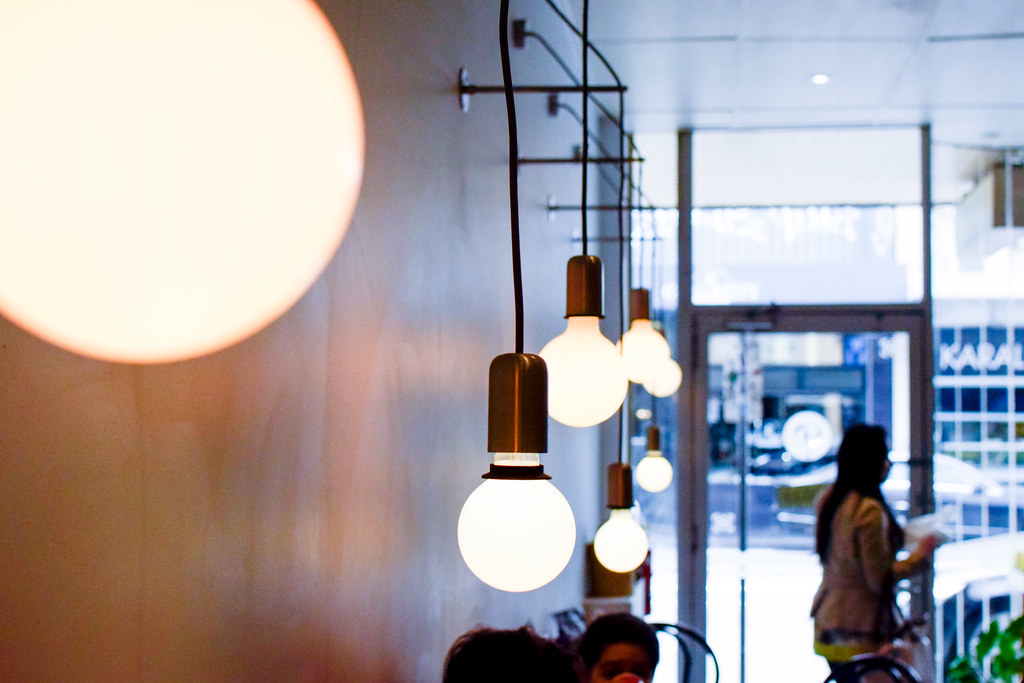 I guess you can’t really compare with the beautiful pastries you can find in France but I was still quite pleased with our discovering of Dana Patisserie. The sweets that we got were pretty decent and they are priced quite reasonably, so I reckon any lover of French pastries would be quite satisfied with Dana’s offerings.

And that was our day out in Balaclava, with Daimz and Ms HH taking us around. We didn’t get to try any Jewish eateries but we did get a sense of the suburb’s character as we drove through the well-kept neighbourhood and spotted quite a few Jewish families walking home from the local synagogue.

And I guess in Melbourne, no matter where you are, there is always that multicultural vibe going on, especially going by the places that we visited that day – and that is just why Melbourne is such a cool place to live in!

So what do you think of the photographs on this post? Pretty cool eh? I think Noel actually captured the essence of each place well – from the cool moody vibe of Monk, to the cosy mood of Batch and to the elegant-sophisticated layout of Dana.

Anyway, Noel is planning to start out on freelance photography so do check out his website to find out more. And if you like his photographs as much as I do, hold up as we have 1 more collaboration coming up soon! 😉

2 thoughts on “Brunching in Balaclava”