Melbourne is just full of surprises in its culinary scene, and I reckon Epocha is one of its latest triumphs.

Having read the news of Epocha being awarded a One Hat rating by The Age Good Food Guide, and going by the recent wave of online reviews, I decided to go ahead with this restaurant for an evening with Ms TY and Ms YY.

Upon arriving at the address, I was in for a surprise – I had no idea that this rising star in the Melbourne’s restaurant scene was sitting in the quiet corner of Rathdowne Street, just up the road from where I used to live! 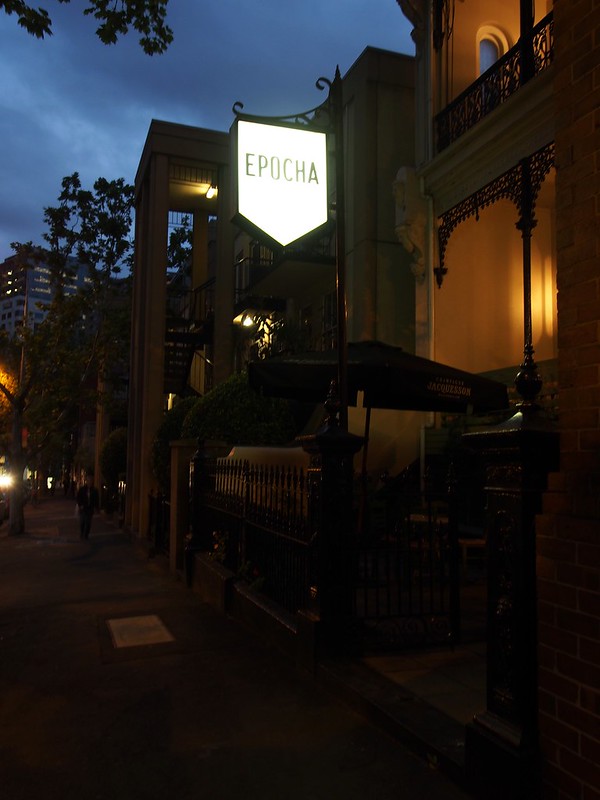 Who would’ve thought that this humble-looking place would be a One Hatted restaurant?

So it appears that this residential Victorian terrace has been converted into a restaurant and for the most part, that forms the charm of Epocha. The first thing you see upon entering is the old fireplace, before you are seated in the dining hall filled with wooden furnishings, under those vintage chandeliers.

You will be very much forgiven for thinking that you are entering a house back in time for a good old dinner party instead of a modern day restaurant! 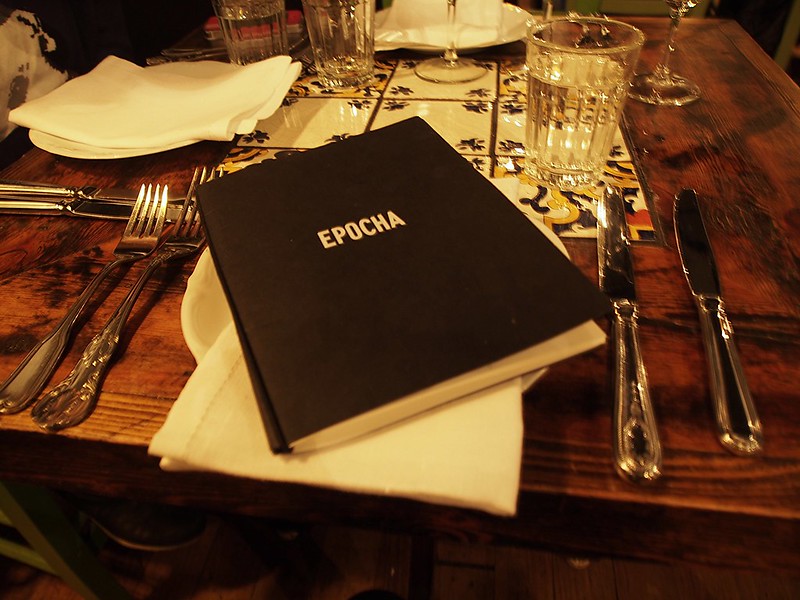 The beautiful dining set up. Notice the ceramic tiles on the wooden table – how vintage!

Also upon entering, we saw this which immediately piqued our curiosity… 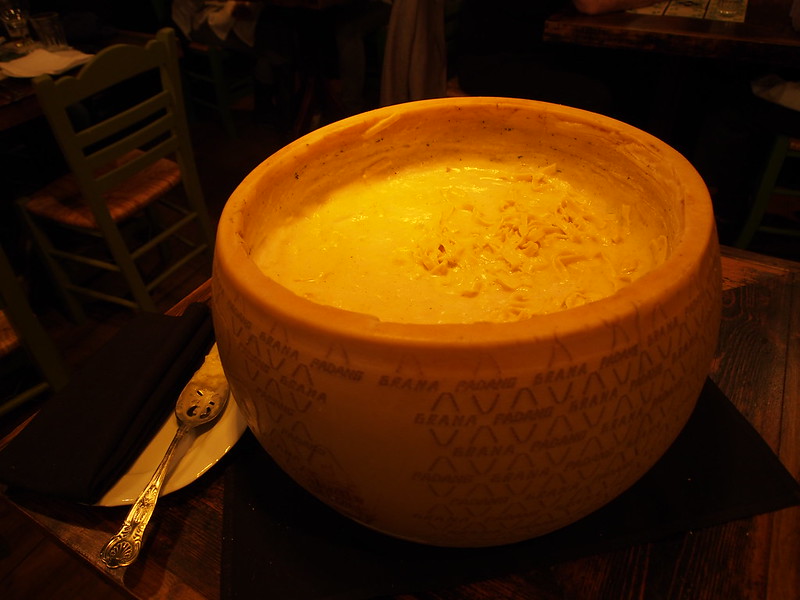 A huge medieval-looking bowl in the middle of the dining room – what could it be?

We couldn’t find anything on the menu that described it so we asked the waiter. It turns out that it was a bowl of cheese (he described what cheese it was but I forgot – oops!) and it was meant to be served with some homemade pasta, a special for that night.

To me, it just sounded like a simple plate of pasta and cheese but Ms TY and Ms YY were so intrigued by the waiter’s description that they insisted on ordering it. Since they were so excited about it, I couldn’t possibly say no!

We went on to order our other dishes and interestingly, the waiter then explained to us the order of which the dishes will come out, from light to heavy. I was pretty impressed with the precision taken in this!

After our orders were taken, bread was served, and again, another surprise awaited us…. 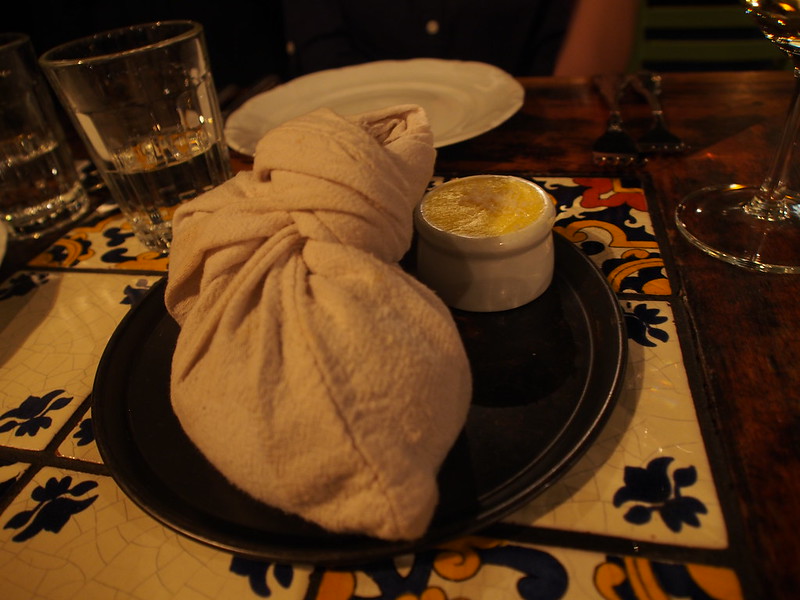 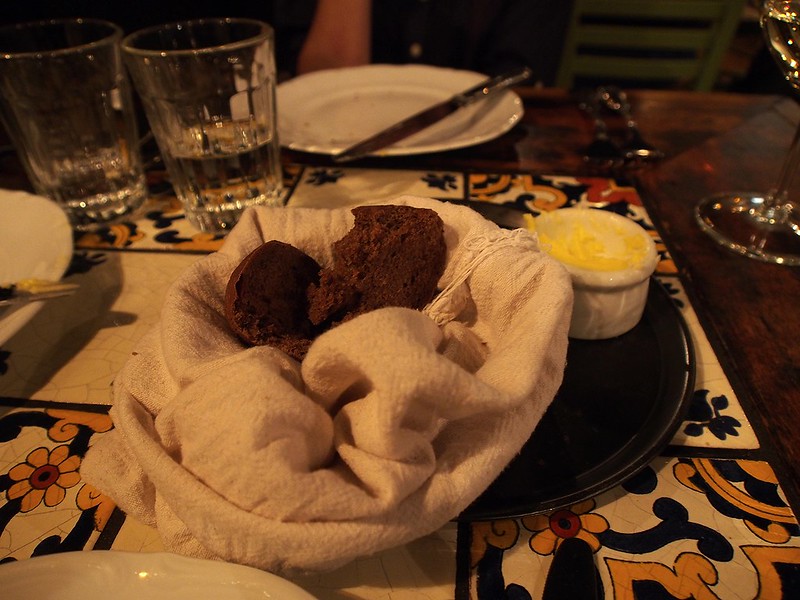 Besides fitting into the vintage atmosphere, I found that the bread packed in the cloth bag seemed to have a stronger aroma and it was kept well and warm.

The bread itself was also really unique – there were hints of Mediterranean spices and the texture of the bread was almost cake-like. Best complimentary bread I’ve ever had!

So the order of our dishes. First up, we were served up the scallops, which was considered the lightest. 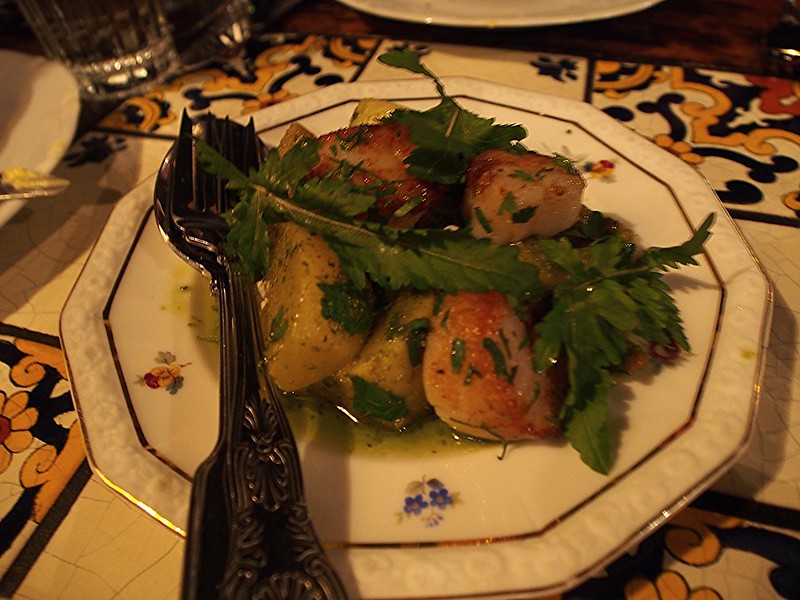 The scallops were cooked beautifully, with them being juicy in the middle. The 2 girls were bowled over by this entree but I did find the dressing a little too citrusy for my liking.

Next up was the homemade pasta with cheese… 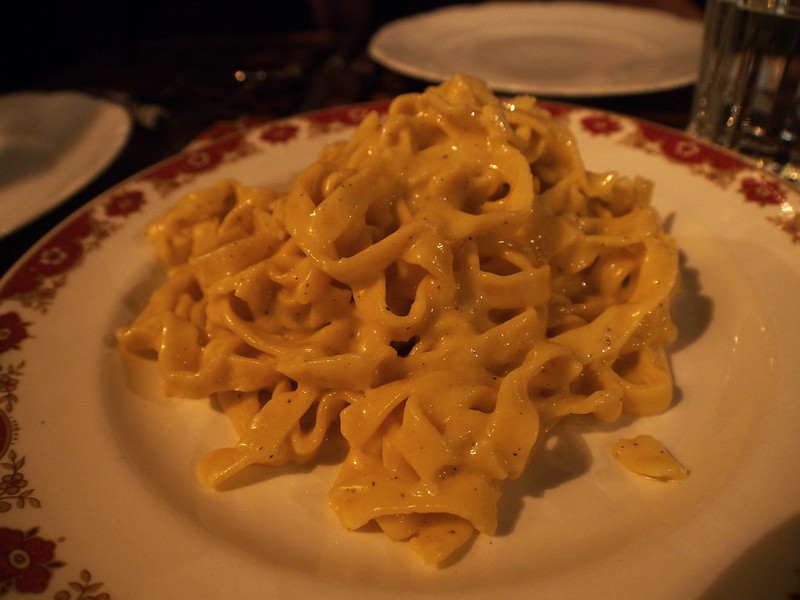 The dish that Ms TY & Ms YY have been waiting for 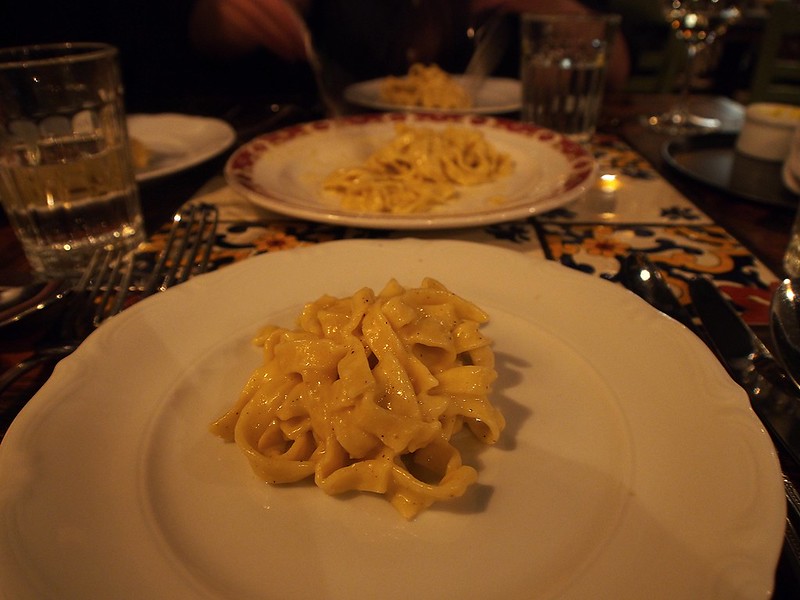 Our portions served up. But don’t be fooled by the seemingly small portion!

The pasta itself was thick and the cheese was rich and full. The small portion for each person was good enough to balance out the richness of the dish but Ms YY did find it a little too creamy for her liking. I was quite a fan of the pasta itself – the texture was springy and cooked to al-dente perfection.

After our pasta plate was cleared, we were served up our next main… 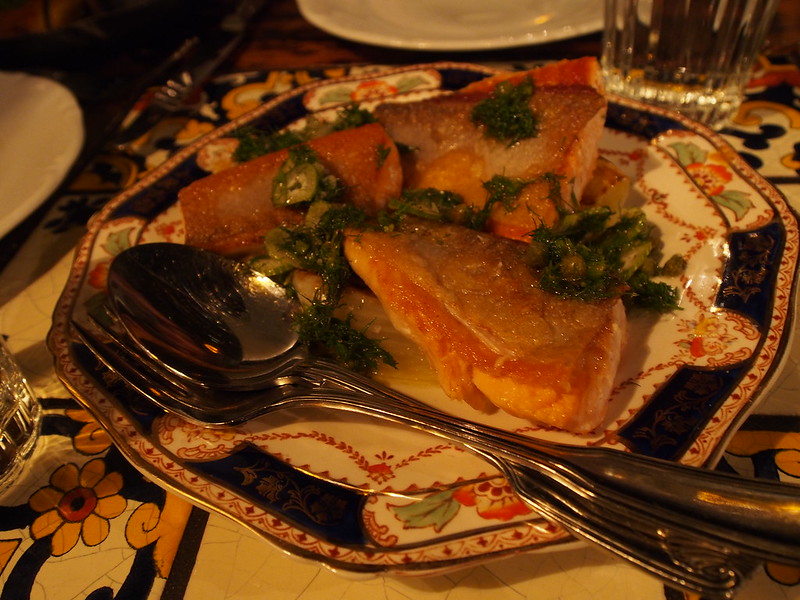 Now, this main got us really excited. The skin was pan-fried to a beautiful crisp and upon crunching onto the skin, you can feel the salmon fat melting in your mouth at the same time. 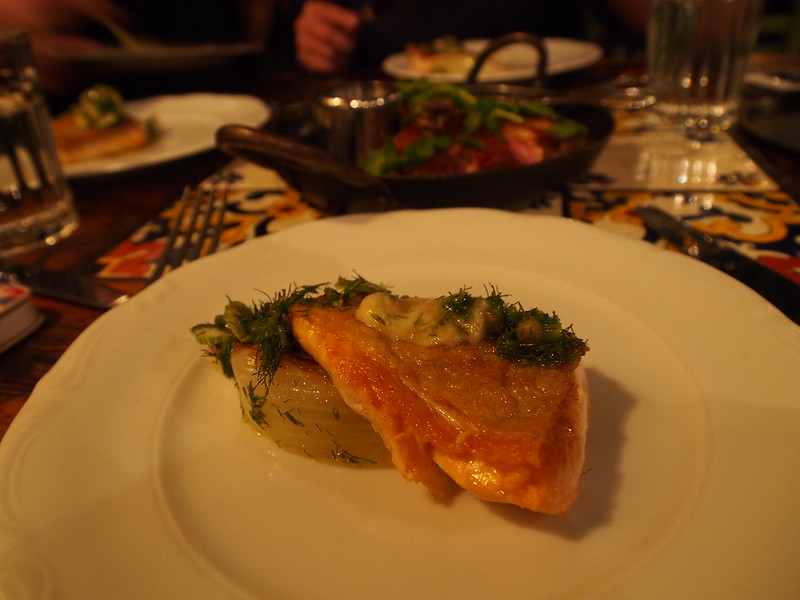 The flesh itself was tender and pulled away easily.The seasonings were light and fresh, complementing the salmon wonderfully.

When we were ordering, the waiter did warn us that we having a tad too many dishes. However, my girlfriends are no small eaters and we couldn’t resist saying no to duck… 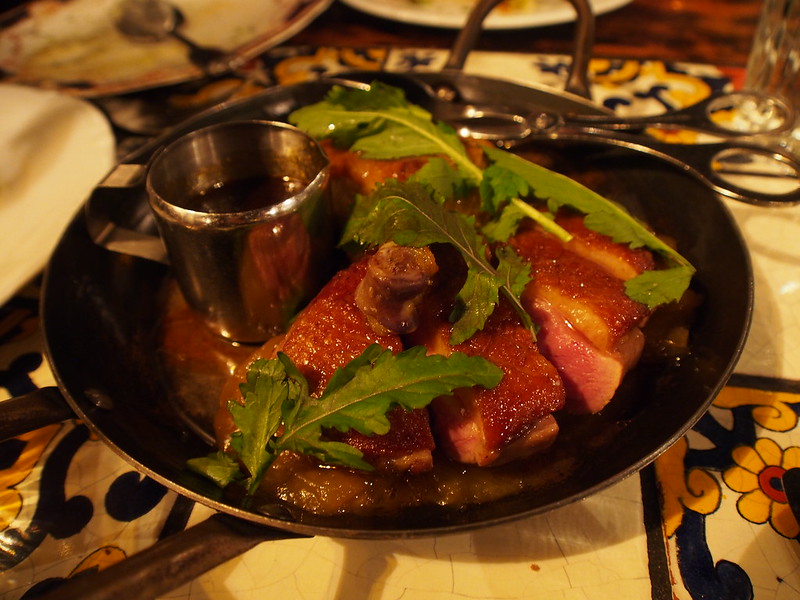 This was the heaviest dish of the night and boy were we glad this was the last. If not, we may have struggled with our earlier dishes!

The duck had that crisp skin with the wonderful pink flesh in the middle. The breast meat was the most well-received as it was really tender and retained all the meat juices. The accompanying sauce was also flavoursome, with a sweet fruity taste (possibly plum sauce?) that helped to lighten up the heavy meat.

Even though we were full by this stage, I heard so much about Epocha’s dessert trays that I egged the other girls on to take a look – after all, I gave in for the pasta dish right? 😛 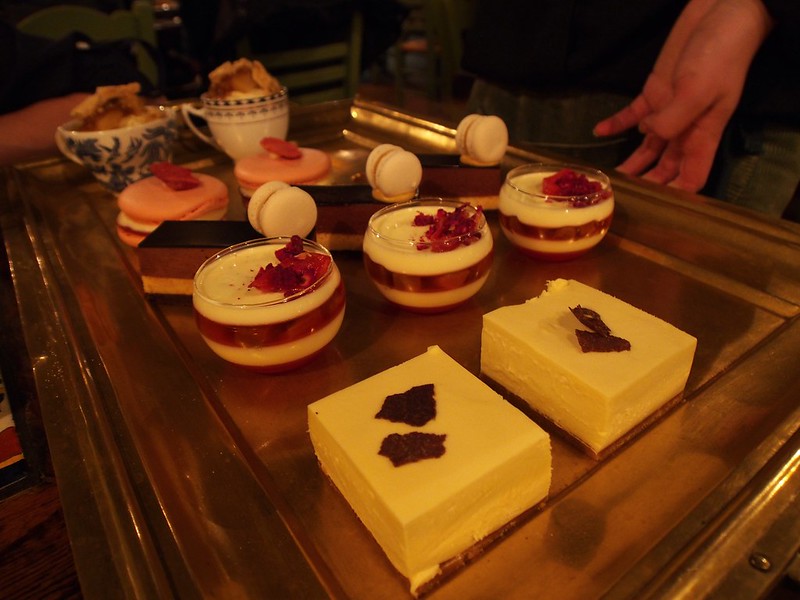 Upon seeing the dessert tray, the girls were fully on-board with ordering dessert. To my utter surprise, they even wanted to order 3 (I was thinking of 2 to share), even Ms TY who is not a big fan of sweets! Guess they looked really good huh? 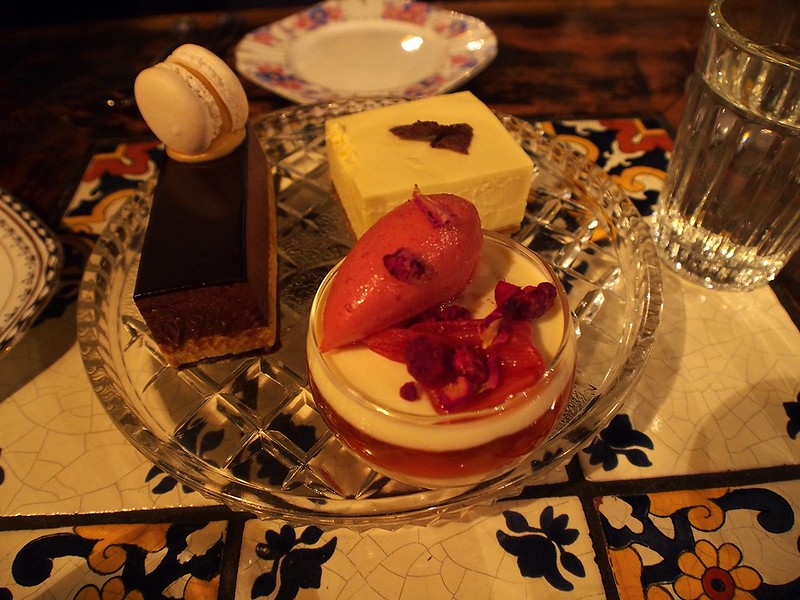 If the entrees and mains have already impressed us, the desserts just blew us away.

While the Chocolate Mousse was a good dessert in itself, the other 2 desserts just stole the limelight in terms of its flavour and combination of ingredients. The Lemon White Chocolate cheesecake was a unique combination, tasting sour and sweet, light and heavy, all at the same time. Probably sounds contradicting but I guess it was the lemon that made it taste citrusy and fresh, while the chocolate gave the dessert its creaminess – does that makes sense??

As for the Panna Cotta, it was nice and creamy, which brought me back to Cinque Terre, and got me talking to the girls about my experience at that Vernazza restaurant  (how nice it is when the taste of food can invoke past memories!). The rhubarb jelly and raspberry sorbet made it a very light and refreshing dessert and altogether, it was an agreeable combination. We all thought that the panna cotta was  the star dessert of the night!

So we left Epocha well-fed and thoroughly charmed by its ambience and well-thought out dishes. Epocha certainly packed in quite a few surprises for us, which made our dining experience a little out of the ordinary, in a good way of course.

And the thing is that Epocha changes its menu frequently as well, so be ready for more surprises when you dine there!

With us having had such a great evening, I would made Epocha 1 of my Top Picks, and I truly think that Epocha deserves its One-Hatted rating – after all, how many restaurants do you know can make you feel like you’ve stepped into another era, and keep you impressed throughout the dining experience, from start to finish? 😉

One thought on “Epocha”